Major media outlets continue to cover-up their hypocrisy in dealing with President Trump.

It is hard to find any real basis for this action. During the campaign, Trump made frequent, unfounded claims that we have a “dysfunctional immigration system” and that unknown people are pouring through our borders. But over the past decade and a half, U.S. immigration enforcement has improved vastly to the point where it bears scant resemblance to the system whose vulnerabilities were exposed on 9/11.

There has not been a single terrorism-related death caused by foreign operatives coming into the country since 9/11.  From Fort Hood to Orlando, jihadist killings have been the work of American citizens and green card holders.  The strong consensus in the counterterrorism community remains that the principal danger today continues to come from homegrown extremists.

Let’s play along, and try to understand that leftist policies place these homegrown terrorists in our midst. But it was the last part of his comment that caught my attention.

Trump’s action has the potential to trigger violence by individuals who are already leaning toward extremism, including some ‘with mental illness.’

In other words it’s the typical Leftist-Globalist line (translated):

“Don’t do anything to make them mad, otherwise they’ll hate us.  And only those who do attack us suffer mental illness.”

By the way, The Tsarnaev Brothers and the San Bernardino killers were left out of his analysis.

Another dirty little secret the American news media will not report to the masses is the United States is not the only country with current Islamic travel restrictions.  In fact some countries have an outright ban; ironically, many are Islamic countries themselves.

He added that Japan would “discharge our own responsibility” in addressing the refugee crisis, which he described as helping to improve conditions that cause the exodus.

But it has offered very few if any resettlement places for refugees from the civil war in Syria.

When many throughout Europe claim they are being ‘invaded,” the statistics back up this concern. Pew Research found that the Muslim immigration has doubled over the last 25 years to its current population of 13 million within the EU. The median age of European Muslims is nearly a full decade younger than the rest of Europe.

Poland has joined most Eastern Bloc countries in opposing Muslim migrations into Europe. Humanitarian organizations in the past have stated that ‘only 10%’ of the global Muslim population is radical. So, using that percentage as conventional wisdom, it could be assumed there are 1.3 million Islamic radicals currently residing within Europe.

Of the four million Syrian refugees fleeing their country, none have been given asylum by the Arab Gulf countries. The UK Daily Mail reports:

The vast majority live in overcrowded refugee camps in Turkey, Lebanon, Jordan, Egypt, and Iraq – all under threat from ISIS – and record numbers are making the perilously long journey to Europe.

Yet, as debate rages between politicians in Europe over how many they should take, nearby super-wealthy Gulf nations of Saudi Arabia, United Arab Emirates (UAE), Qatar, Kuwait, and Bahrain have refused to offer sanctuary to a single Syrian refugee.

None of the Gulf countries signed the 1951 Refugee Convention which defines a refugee ‘outside the country of his nationality’ because of ‘fear of being persecuted for reasons of race, religion, nationality’.

Gulf nations argue that accepting large numbers of Syrian refugees is a serious threat to the safety of its citizens because terrorists could hide themselves among civilians.

However, Time Magazine reports the true answer is a much simpler, ‘discrimination’:

The logic behind Gulf refugee policies is complex.  In smaller Gulf states like Qatar and the UAE, foreigners already far outnumber nationals, a demographic balance that, for some, feeds feelings of anxiety tinged with xenophobia.  In the UAE, foreign nationals outnumber citizens by more than five to one.

As this chart shows, the ‘racist’ Americans and ‘xenophobic’ Europeans have been far more charitable to Muslim refugees than their Muslim brethren: 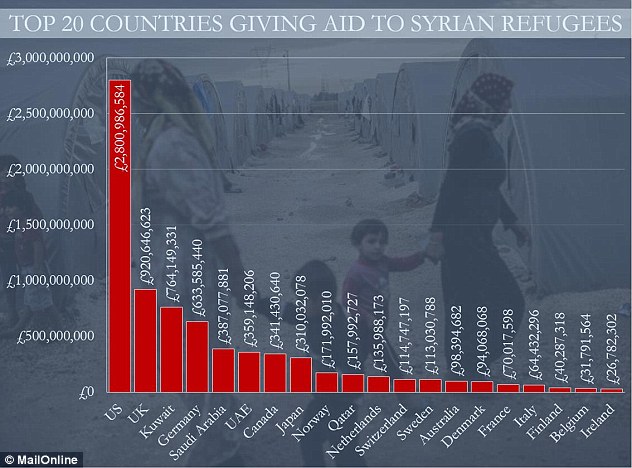 ‘We are Merkel’s GUESTS’

Germany is currently home to over half of Europe’s Muslim population, thanks to Angela Merkel’s globalist policies. Yet Europe’s largest growing immigrant group are refusing to assimilate and join mainstream German society:

According to Mayor Bernd Pohlers of the eastern town of Saxony Waldenburg, the asylum seekers refused to accept the work that was offered to them after they arrived in the country.

The local council spent £600 arranging for the men to have uniforms but were stunned when they were told they would not complete it because they were “guests of Angela Merkel”.

While asylum seekers are not allowed to work under immigration rules within the EU, they are allowed to do voluntary work.  However, officials in the district of Zwickau came up with a plan to help encourage those without employment to get back to work and to help them become more accepted within the local community.  In order to do this they created voluntary jobs which included a nominal payment of £18 for 20 hours work.

They have declined voluntary jobs offered to them since arriving in the country and used the hospitality of the German Chancellor as an excuse, a town mayor said.

The town has confirmed that the asylum seekers are still not working.