If President Trump is damaged goods, then why did this Congressional Black Caucus race-pimp meet with him?

After 6 weeks of political games, where members of the Congressional Black Circus vowed not to work with America’s new president, a meeting has been set.

A senior member of the Congressional Black Circus requested a meeting with President Trump today to discuss a new prescription drug bill Democrats want him to sign.

Getting Political Ducks in a Row 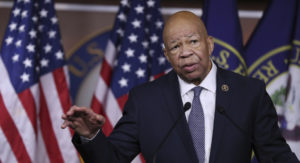 The president previously called Cummings and asked for a meeting after the representative discussed drug prices in a press interview. Afterwards, the president said his office tried repeatedly to plan the meeting without success.

“He wanted it. But we called, called, called and I can’t make a meeting with him. Every day, I walk and say, ‘I would like to meet with him,’ because I do want to solve the problem.”

When Cummings delayed the meeting after it was put on the books, Trump speculated that prominent Democrats like Chuck Schumer, (D-NY), pressured Cummings into bailing.

“He was probably told, ‘Don’t meet with Trump. It’s bad politics,’ and that’s part of the problem in this country.”

And like a good plantation Negro, Cummings did what he was told.

Cummings didn’t deny that a White House meeting was on his calendar, or that he pulled out. But he disputed that Schumer ordered him to cancel.

That’s his story and he’s sticking with it.

The congressman said he was not ready to meet with Trump until he had legislation to discuss. Or perhaps he thought the Russian story might have caused President Trump to quit?

The Moment of Truth

Maybe Trump felt that Cummings staff wasted his time with the back and forth. The efficiency president doesn’t like wasting anything, especially time. And the notorious Washington logjam does that habitually. They need to find a new gear, and Trump may help them do just that.

Cummings, Sanders, and others said that Trump needs to prove his commitment to solving the problem by backing their bill.

A sitting senator commands the sitting president to do what he’s told or shut up. No wonder those establishment liberals don’t want to meet with the unpredictable, outside-the-beltway president. I can’t wait to see President Trump break out the art of the deal on their whiny asses.

Saving on drug costs was discussed by then candidate Trump. He suggested that Americans could save hundreds of billions of dollars if Medicare could negotiate prices with drug companies – a position Democrats support.

Democrats should be warned. They continue to approach the president as though they won the election. I foresee an attitude adjustment coming.