Under Obama and other Leftist president,why did the youth of other countries take priority over America’s children?

Decades of open border policies by both Presidents Bush, Clinton and Obama allowed criminal illegals access to our most precious resource: American citizens.

Twelve of Obama’s DREAMERS recently murdered 7 American citizens and kidnapped another. All suspects belong to MS-13, a gang that runs drugs and mayhem across the Western hemisphere. 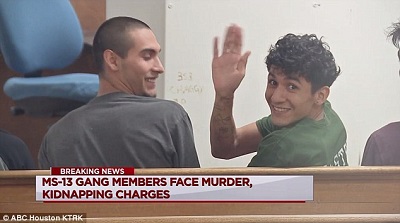 Prosecutors said the pair kidnapped a 14-year-old girl on February 2, holding her for weeks in two different apartments while repeatedly raping her. The second apartment had a satanic shrine and another teenage victim. These thugs subdued their victims with drugs and alcohol to keep them disoriented. The unidentified second victim destroyed their shrine, so they murdered her. Police found her body on February 16 and Rivera confessed to the killing.

Federal authorities placed a hold on Rivera and Flores. If released on bail, ICE agents will take them into federal custody.

Then there are these “Dreamers.”

In New York on Thursday, police arrested thirteen MS-13 gangbangers in the murder of three Brentwood High School students. On September 13, a carload of teens ambushed Nisa Mickens, 15 and Kayla Cuevas, 16, bludgeoning them to death with baseball bats. Following his disappearance in June, Jose Pena-Hernandez, 18, was found hacked to death at an abandoned state psychiatric hospital.

Give them a cute name like “Dreamers”, then sell the idea that they are “all God’s children.”

Democrats import thugs and their offspring with callous disregard for the threat they pose. And America’s youth are being slaughtered. Here’s another video that speaks to Dreamers brutal murders.

Congress never passed the DREAM Act, yet, it represents de facto law. The Washington swamp prevents border patrol agents from deporting criminal illegals who are or came here as minors. Then Obama codified this law as an executive order called DACA.

You won’t hear these tragic stories being told by Democrats. Telling America the truth about these heinous criminals defeats the narrative that “Dreamers” are all studious, and contribute to society.

Convince me that these kids don’t bring their culture with them, and instead become solid American citizens. I’ve seen their protests, as they take down the American flag and replace it with the flag of the armpit of a country from which their parents and they fled.

These Dreamers are in fact unappreciative, ingrates. They have been told by idiot Leftists that America owes them something. We owe them nothing.

The Trump administration has cracked down on criminal illegals, and not a moment too soon.