The Hillary Effect convinced Muslim spies to use of an offsite server without telling anyone.

Democrats opted for appearances over national security. Thus they ignored Muslim spies who stole secrets and did who knows what else.

When did Congress become a Soft Target?

The Black Sphere previously reported that three Muslim brothers managed IT for several congressional offices and allegedly accessed computer networks without permission. Multiple offices shared their services, thus each member had to fire them individually.

An offsite server to which the accused spies loaded congressional data without permission is the focus of U.S. Capitol Police investigators. How could they possibly have gotten the idea to set up an offsite server?

The brothers beginning in 2009 operated a Northern Virginia car dealership. The business received a $100,000 loan from Dr. Ali Al-Attar that was never repaid. Al-Attar, who has links to the terror group Hezbollah, was an Iraqi politician who fled the U.S. on tax charges.

The alleged illegal access and suspected theft of equipment prompted most employers to fire these Muslim traitors a month ago. However, two liberal holdouts sought to reserve judgement. Those Democrats delayed the firing until today.

The spies’ Muslim background made them default targets for potentially false charges.

The Importance of Naming our Enemy.

Politico reports that Rep. Gregory Meeks (D-NY) and Rep. Marcia Fudge (D-OH) finally fired the IT staff today. Meeks claims he is not convinced Alvi and Imran Awan participated in the alleged thefts. However, he fired Alvi because the investigation was interrupting the day-to-day functions of Meeks’ office.

Day to day operations like stealing America’s secrets and selling them to the highest bidder? For Democrats, that’s par for the course. Oh how rude.

Then, there’s that pesky national security interrupting the Congressman’s day.

“As of right now, I don’t see a smoking gun,” Meeks said. “I have seen no evidence that they were doing anything that was nefarious.”

Meeks doesn’t believe the accusations against Alvi and Imran Awan and three other staffers. The Democrat alleges their Muslim background makes them easy targets for false charges. If I were best friends with a terrorist, I’d defend him too. Well, maybe not.

“I wanted to be sure individuals are not being singled out because of their nationalities or their religion. We want to make sure everybody is entitled to due process,” Meeks said. 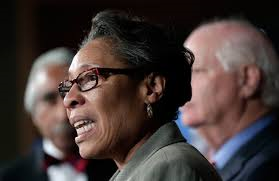 Fudge refuses to fire Imran Awan until he receives “due process.” Both Democrats choose to reserve judgement and maintain the threat to national security.

“He needs to have a hearing. Due process is very simple. You don’t fire someone until you talk to them,” Fudge said.

A spokeswoman confirmed Imran Awan still worked for Fudge as of Tuesday.

Terrorists exploit liberal compassion to attack America from within the very heart of government, and Democrats’ biggest concern lies in public perception?

Multiple sources confirm Awan and his wife are long-time social friends with Meeks, Wasserman-Schultz, and Fudge. Meeks hired Awan in 2004; Wasserman-Schultz followed suit in 2005. Finally, Fudge did so in 2008. How cozy is that.