It might be time to change Nebraska from the “Corn Husker” state to the “Vote Hustler” state.

Recently Nebraska Democrats started handing out welcome baskets to refugees. However, the baskets had more than the American taxpayers bargained for: voter registration forms.

And here I thought you needed to be a citizen to vote.

If the obvious disregard for American taxpaying citizens wasn’t enough, Leftists later bragged about their voter registration scheme at their Spring meeting.

The video, posted Saturday March 18, discusses the details of the “Refugee Welcome Basket” project and was recorded at the Nebraska Democratic Party’s Spring Meeting.

This represents another example (and there are many) of how leftists completely ignore the Constitution.

But sentiment around refugees is beginning to change in favor of sanity. In light of the uptick in refugee violence against citizens, mainly women and children, even Leftist Americans are rethinking their stance.

The rape of a girl at a Baltimore school by two non-citizens has caused a stir in a very Leftist area of America. And there will be others. 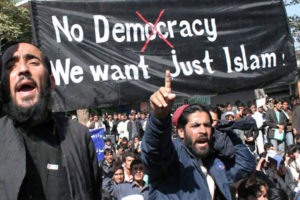 Further, these refugees drain the system.

They don’t even respect democracy. Nevertheless, Democrats ask refugees to participate in governing us.

Refugees beg for housing, education, food, clothing, and medical care. Meanwhile, they vandalize their accommodations and made crazy demands. In one German asylum, refugees destroyed the place because the cell phone service was poor.

We have caught terrorist disguised as refugees. Moreover, these terrorists admitted to killing our soldiers. And yet, we pass out welcome baskets.

Even Syrian President Bashar Assad came forward to say Donald Trump is telling the absolute truth. In fact, many refugees are terrorists. Yet that isn’t enough for Leftists to acknowledge the dangers we face dealing with refugees.

These Leftist refuse to house these refugees in their own homes, and don’t want them in their neighborhoods. Where exactly do they think these terrorists should go?

These Democrats ignore reason. They ignore the actions of other countries who now finally understand that Islam doesn’t gel with civilized society. Yet, Leftists welcome them openly with our tax dollars and then attempt to register them to vote.

If you don’t think Trump is a gift from God, you will soon.