It’s funny when Leftists admit to what we already know.

No surprise that Donna Brazile gave Hillary Clinton the debate questions. And you can bet that crooked Hillary was giddy to get them. Had she had any character, she would have rejected them. Then she would have chastised Brazile for breaking the rules, and asked that she never do such a thing. Win fair and square, said no Democrat EVER!

The woman who thought she had the situation in the bag cheated and still lost.

Nevertheless, Brazile does admit to the cheat, according to the Washington Examiner.

Veteran Democratic operative Donna Brazile finally admitted that she used her former position as a CNN commentator to relay questions ahead of debates to Hillary Clinton during the Democratic primary. For months, Brazile has avoided confirming that hacked emails from the campaign showed her forwarding the questions, which were asked at separate debates. But in a new essay for Time magazine looking back on the hackings, she said it was true.

“[I]n October, a subsequent release of emails revealed that among the many things I did in my role as a Democratic operative and [Democratic National Committee] Vice Chair prior to assuming the interim D.N.C. Chair position was to share potential town hall topics with the Clinton campaign,” she said.

As recently as February, Brazile would only say that the emails “allegedly” showed her forwarding the questions.

In her Time essay, however, she said she was remorseful.

“My job was to make all our Democratic candidates look good, and I worked closely with both campaigns to make that happen,” she said. “But sending those emails was a mistake I will forever regret.” 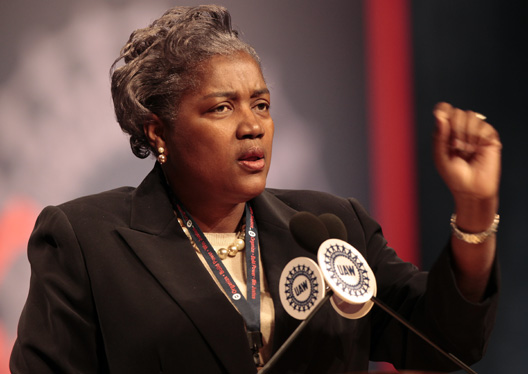 As we all know, the supposedly then unconfirmed allegations got Donna Brazile fired from CNN.

Note that yet another accomplished black woman derailed her career for Hillary Clinton.

Brazile is now a known cheat, corrupt to her ideological core. All for a corrupt twice failed presidential candidate.

Now, try to imagine if a black guy sacrificed himself for Trump, what would the media say. God forbid Trump caused a black woman to lose her job and ruined her reputation over him!