Barack Obama is no prophet. In fact, Chicago couldn’t care less about Obama.

The citizens of Chicago know that Obama pimped them. The city was fine before Obama; and frankly, it’s better without him.

People say Obama stayed in DC for his daughter’s education. Nonsense. Chicago was not a safe city for him. DC has a lot of crime, but political criminals appreciate Obama’s massive expansion of government. Most have their jobs because of Obama.

And at street level, the thugs know who buttered their bread. Without the politicos to rob, the DC thugs would be forced to move to Virginia or Baltimore.

In Chicago, people detest Obama. So when the Leftist legislature tried to honor Obama’s birthday officially, they ended up embarrassed. 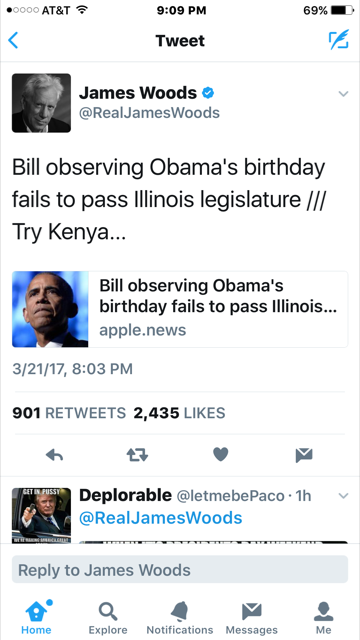 Illinois lawmakers failed to pass a measure in the legislature that would have made former President Barack Obama’s birthday a statewide holiday, according to the Chicago Tribune.

The bill would have observed August 4 as a legal holiday in his home state, but the Chicago Tribune said the proposal was six votes short of passing, where it would have next moved to the Illinois Senate.

“The fourth day of August of each year shall be a legal holiday to be known as Barack Obama’s Birthday to be observed as a day on which to hold appropriate exercises in commemoration of our illustrious President. When August fourth shall fall on a Sunday, the following Monday shall be held and considered the holiday,” the text of the bill states.

And this wasn’t the first time Obama was not celebrated as a “native son”. Here’s what I wrote back in 2015:

It was shocking that Barack Obama graduated from Harvard as the president of Law Review He’s not that smart. But more interesting, Obama got not serious job offers. In fact, he only got one job offer: from criminally indicted convict Tony Rezko.

Perhaps just as shocking is Hawaii, the state from which Obama hails wants this named after Obama!

As reported in the Chicago Tribune,

Stanley Chang hatched a plan last year to overcome seven years of failed attempts to name something after Hawaii’s most famous native son.

His target: Sandy Beach, a stunning strip of sand and volcanic ash that he hoped to re-christen “Barack Obama Beach.”

Chang had heard from a congressional staffer that Obama often spoke fondly of body surfing there as a teen. And he had read an interview in which the president described his ideal day as one spent at the Oahu beach.

“It was almost a prose poem,” said Chang. Obama imagined a sea turtle swimming in profile, “like a hieroglyph in the water,” the rolling crest of a perfect wave, the sunset “glittering” as the swimsuit-clad commander in chief sipped a soda.

Chang, who recently stepped down from the Honolulu City Council, submitted his bill, insisting that the beach was one of the president’s “favorite places in the world.”

Like all of the previous Obama naming efforts, however, it has gone nowhere.

This isn’t the only attempt to name something after Obama that has failed.

Since 2009, Hawaii’s politicos have sought to name two schools, an abandoned lot, a scenic overlook and two state holidays after Obama. An effort to put the 1960s-era cinder-block apartment building, where he lived, on the National Historic registry fell short.

For now, the most famous thing that bears Obama’s name here is the “Snowbama,” a shaved ice that’s a mix of lemon, lime, cherry and passion guava flavors and sells for $4 at Island Snow, one of the president’s favorite vacation haunts.

To hear Obama discuss his legislative achievements, you’d believe he was transcendental as president. Further, one would think that Hawaii would be feverishly naming things after America’s first black president. But, that’s not the case.