Ad Victorem Spolias is Latin for “To the victor goes the spoils.”

The statement gained prominence when during a Congressional debate in 1831, New York senator, William L. Marcy used the phrase to accurately describe the spoils system of appointing government workers.
As we are learning today, each time a new administration comes into power thousands of public servants are discharged and members of the victorious political party take over their jobs.

However, the Left remember only the history that fits their narrative. And they are at it again. Leftists lament the “business as usual” act of dismissing previous administration staff. As most people have learned, Attorney General Jeff Sessions requested the resignations of Obama holdovers in the Department of Justice.

As most people have learned, Attorney General Jeff Sessions requested the resignations of Obama holdovers in the Department of Justice. Predictably, the fake news media went berserk, saying that President Trump attempts to thwart investigations. Because bringing in one’s own staff is seen as sinister by the Left, when a Republican does it.

And then we learn the facts. ALL presidents do what President Trump did.

Here’s what was written about Bush, after he fired 93 attorneys and was attacked by the Left.

Last night, Fox News’ Brit Hume kicked off his show by criticizing the media for “news stories reporting that the Bush administration had considered firing all 93 U.S. attorneys across the country [that] failed to mention that that is exactly what Bill Clinton did soon after taking office back in 1993.”

This argument has been making its way around the conservative echo chamber. Wrote Brent Baker: “The broadcast network evening newscasts, which didn’t care in 1993 about the Clinton administration’s decision to ask for the resignations of all 93 U.S. attorneys, went apoplectic Tuesday night in leading with the ‘controversy,’ fed by the media, over the Bush administration for replacing eight U.S. attorneys in late 2006.”

It seems that Leftists just wait for anything to happen in order to complain. Facts don’t matter when you’re waging a useless argument.

Bush, Trump, whomever. As long as the person has an R after their name, criticism is warranted.

Bill Clinton and Janet Reno gleeful dispatched of Bush attorneys. Such is the law of the jungle. Kill the young of the group you take over, thus no chance for revenge.

Who understands this better than Donald Trump.

Dinesh D’Souza pointed out that Sessions himself was the victim of a takeover. 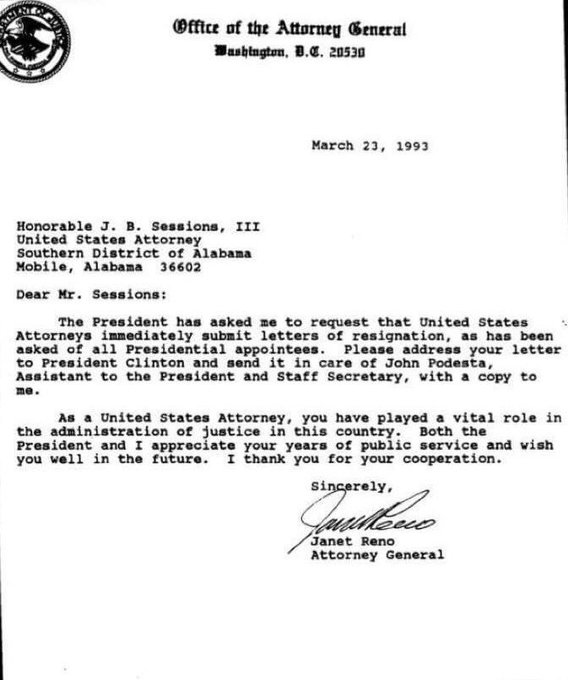 Turnabout is fair play. President Trump has a mandate.

If the Left doesn’t like it, then show up at the ballot box. Wait, they did; and many of them voted for Trump!