Trump’s history-making win in 2016 disoriented the Left. They now scramble to find someone to take him down.

Having exhausted their list of viable political insiders, Democrats turn to the entertainment industry.  Enter another race-baiting leftist with no experience in politics.

After Kanye declared his potential run in 2020, why not Oprah?  She didn’t rule out the possibility of running for president in 2020 when interviewed yesterday by  David Rubenstein:

“Have you ever thought, with the popularity you have.  We haven’t broken the glass ceiling yet for women. That you could actually run for president and actually be elected?”

The question surprised Oprah, but also got her thinking about it.

“I actually never thought that that was – I never considered the question even a possibility. I just thought, Oh. Oh!”

Rubenstein:  “Right, because it’s clear that you don’t need government experience to be elected president of the United States.  Right?”

She then denied it, taking a dig at President Trump: 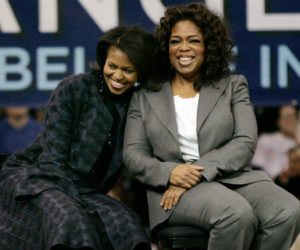 As one might say on Weight Watchers: Fat chance!

Oprah can’t run her “own” network, pardon the pun. Nevertheless, social media exploded at the possibility. Why not? Social media is chocked full of Leftist lemmings, salivating at the idea of anybody taking down Trump.

They certainly realize that no existing Democrat can do it.

As long as she’s popular, what else does Oprah need for victory?  Grief-stricken at the possibility of a two-term Trump presidency, desperate liberals grasp at straws.  Winfrey is a race-baiter who declared that whites in America still terrorize blacks because of their race.  Liberals cheer someone who claims American racism won’t disappear until older white people die.  That’s exactly what will get Democrats back into the good graces of working class whites.

Remember this? In a BBC interview, Oprah referenced Joe Wilson when she decried all political opposition to Obama as racism:

“I think there’s a level of disrespect for the office that occurs … because he’s African American.”

Rep. Joe Wilson (R-SC) calling Obama a liar during the president’s speech to Congress in September 2009.  Apparently, accusing a black man of lying is racism.  I’d bet you there will no such suggestions at the “guffaws,” when President Trump is heckled.

If Oprah does run, she may need to re-think her version of Christianity.

Winfrey’s double-mindedness contradicts the Bible. On one hand, she insists she is a Christian. Yet, in a YouTube video Oprah staunchly declared Jesus is not the only way to the Father.  She even allowed “no-hell” Rob Bell to trash the Bible over gay marriage on her broadcast.