A tweet by Ann Coulter alerted me to this story.

After fighting against the Muslim hordes in The Crusades, the Pope now wants to befriend “the religion of peace.”

This new Pope readily dismisses the atrocities by thousands of Muslims daily against people of their own religion. Additionally, he most certainly dismisses Muslims’ atrocities against Christians and Jews.

What kind of demon dares to legitimize a religion who has millions of followers who practice hate? Yet, according to the New York Evening, this Pope has done the unthinkable.

On Sunday readings from Quran were heard at the Vatican. This move was initiated by the Pope Francis in order to bring peace between Israelis and Palestinians.

Peres’s spokesperson has announced in Times of Israel that Abbas, Peres, and Pope Francis will be joined by Jewish, Christian and Islamic religious leaders.

According to the officials, these evening prayers are a “pause in politics” and have no political aim behind it other than the desire to bring peace and respect to the Israeli-Palestinian relations, states the Associated Press. 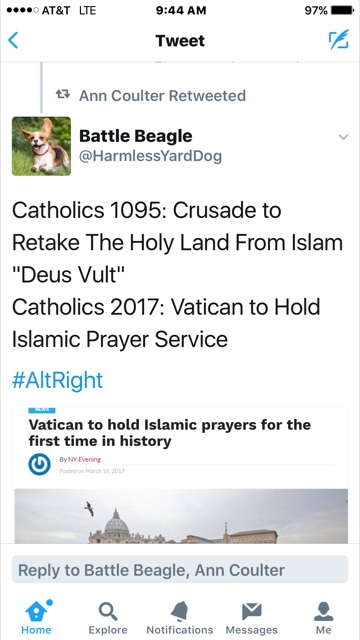 This reeks of politics, and you can bet the Vatican was paid handsomely to create such an event.

First, peace in the Middle East for Muslims means that Israel disappears from the face of the Earth. Second, there is no such thing as peace for Muslims, as they are like leftists. They must constantly bitch about something, as that is their nature.

Muslims have MANY countries, and you can’t find peace in the majority of them. Moreover, of the over 60 million displaced peoples around the world, the overwhelming majority come from Muslim countries.

The Vatican’s spokesperson downplayed the significance of the event.

The Vatican broadcasted the event worldwide through the official website.

However, Rev. Pierbattista Pizzaballa, the custodian of Catholic Church property in the Holy Land announced that people should keep their expectations low when it comes to this event.

[No-one should think] “peace will suddenly break out on Monday, or that peace is any closer,” he said to AP.

Really? We can’t expect peace in the Middle East with this latest move? Shocking!

Sadly, this isn’t the first time the Vatican made this particular play for attention. In June, 2014 the same “pause in politics” was announced. Readings from the Koran accompanied Islamic prayers. Apparently the Vatican headlines of “the first time” were soon forgot. However, headlines were repeated nearly word for word less than three years later.

Furthermore, I’m shocked that Muslim mosques all over the world haven’t reciprocated to the Catholics. I don’t think I will hold my breath waiting on that to happen.