Obama said it time and again, he wasn’t ready for goodbye. In fact, he gave more farewell speeches than a southern Baptist preacher shouts Amen on Sunday morning. Now Obama’s trying to undermine Trump with a master plan that would force a resignation or impeach him. He can’t stand to be followed by a President that actually serves the American people. So he’s gonna bring in his side chick and try to develop a plan.

Michelle Obama and Valerie Jarrett are long-time BFF’s, so they cozy it up while talking foreign policy or deciding the next big way to deceive Americans. While Jarrett may have been low key during the Obama administration, I guarantee she influenced policies all along the way.

Now Obama does have an office on the West End of the White House, but he can’t use that as the brain of his operation. Therefor his new mansion is only two miles away. This way he can be a thorn in Trump’s side at all times. According to former Attorney General Eric Holder, Obama is almost ready to reappear. (As if he was ever really gone.) Holder said: “It’s coming. He’s coming. And he’s ready to roll.”

Sounds like Obama’s war on America is about to amp up. We know he recently met with his former White House staff- including Joe Biden, Susan Rice, Josh Earnest and Jarrett. Presumably he solidified his role as leader of the opposition.

According to Leon Wagener:

‘No longer the most powerful man in the world, he was just observing Trump and not liking what he saw,’ said the source.

‘He was weary and burned out after eight years in office. But Valerie convinced him that he didn’t have any choice if he wanted to save his legacy. And, as usual, he bowed to Valerie’s political wisdom and advice.’

‘Obama doesn’t make a decision without her.’

Obama’s biggest conflict with Trump is the executive order restricting immigration, especially from Muslim countries. As Obama is clearly a closeted Muslim, and enjoys freeing terrorists in his spare time, he took offense to Trump’s safety measures.

With Jarrett on one side and Michelle on the other, Obama thinks he can call Trump illegitimate. Obama plans to use Leftists to attack conservatives and their leader.

The Demolition of a Legacy

Obama is especially ticked off to see his legacy shredded bit by bit, starting with the diabolical Obama-no-Care. Trump continues to work to repeal and replace it. Trump is trying to beat the clock before the poorly crafted legislation crashes and burns.

Furthermore, let’s not forget the cabinet. Obama can’t stand Jeff Sessions and he uses the race card as a reason to argue against Session’s placement. Then Trump left Comey as FBI director. Obama loathes the man who investigated Hillary’s emails. The list goes on and on. 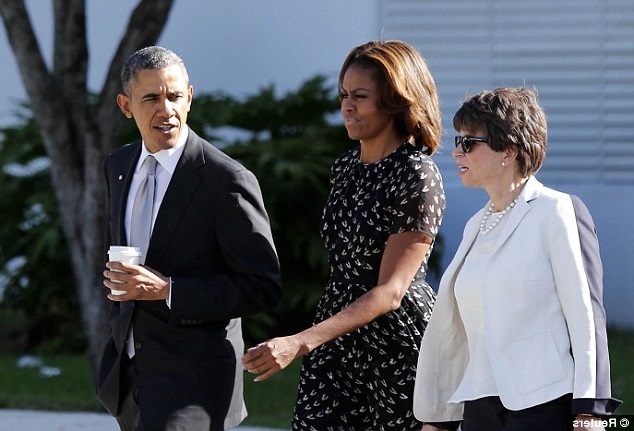 All these things heaped together are Obama’s reasons for his so-called “shadow government”. Meanwhile Jarrett and Michelle are cajoling Barack, stirring his anger every chance they get. These ladies hope Obama can take down Trump. However, Obama can’t defeat the constitution. His terms are over.

At best, the trio can sell the videos of their escapes to an adult website.

Obama should go back to plan A.

‘He had hoped to write his memoirs, golf to his heart’s content. and bask in the glory of his eight years in power and the progressive achievements he brought about. Instead, he is going to be leading the fight and strategy to topple Trump.’

Obama is too dumb to know it, but Trump will pulverize him. The insurgency is a joke.