Biased Leftist reporter who slanted questions to solicit specific left-leaning answers got educated in the facts.

On Face the Nation this week, Rep. Trey Gowdy (R-SC), lambasted CBS anchor John Dickerson with the Truth. He then repeated the tongue-lashing 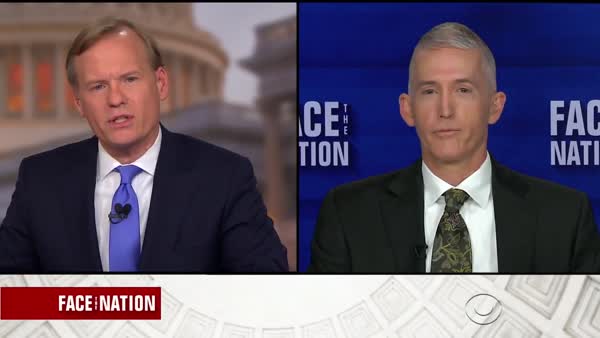 Let’s take this step by step.

“He has not shown it to me, John. I’m vaguely familiar with it. No more, no less familiar with it than Adam Schiff is. I’d just say this. My understanding is Chairman Nuñes briefed the commander-in-chief on matters unrelated to the Russia investigation. So, if that’s a big deal in Washington, then we’ve sunk to a new low.”

In other words, Nuñes did his job. And there’s nothing suspect in a congressperson doing their job as described.

“I guess Congressman Schiff would say, “But the president is the one that’s a part of this investigation being done by the committee. So, the chairman shouldn’t be talking to him.”

Believe it or not, congressional committees conduct multiple investigations at the same time. Gowdy schools Dickerson about Nuñes’ job description, as well as how busy Congress can be.

Once again, the leftist reporter failed to understand that Gowdy won’t confirm liberals’ false narratives about Trump or Congress.

“So, if this is an issue outside of the one they’re investigating at the moment in the committee, and that you’re investigating – should it then be taken out of this investigation?  … Keep things from getting mixed, the way they appear to have?”

The only people “mixing” the narratives regarding completely separate investigations are liberals. Gowdy schools Dickerson, yet again.

“Well, they are separate. And, I heard my friend from California mention an independent commission. Thank goodness we have one. It’s called the F.B.I. The F.B.I. has counterintelligence jurisdiction and they have criminal jurisdiction. Now what we learned on Monday, and it’s the only thing we learned on Monday, was that the F.B.I. is investigating both. … So, we have an independent entity investigating counter-intelligence and allegations of potential criminality.”

Dickerson then wanted to know when Congress will ascertain if the “unmasking” by Obama staffers of Trump campaign surveillance was illegal. Gowdy then schooled the anchor and Democrats alike about what really matters:

“It’s just one more reason to bring Director Comey and Admiral Rogers back on Tuesday. It’s incredibly important. … Adam is right that the incidental collection of U.S. persons happens. What I wish some of my friends on the other side would be a little more outraged about is the political use of that unmasking. So, I understand we collect U.S. citizens. … That, in addition to threatening the surveillance programs, is also a felony. So, I hope that we learn more about that on Tuesday. All of this is important, John. … But the felonious dissemination of classified information, is the only thing we know for sure is a crime. And it would be nice if we showed the same level of interest in that.”