While the purchase of 1.6 billion rounds of ammo has been debunked, the very real need for bullets by many in law enforcement is not.

The original story of a massive purchase of bullets by Obama fooled even the reputable news outlets, e.g., FOX News, Forbes, and a few others.

Nevertheless, the need for ammo by U.S. Immigration and Customs Enforcement today is real.

Reports are that ICE possesses a “limited amount” of 9mm bullets for agents in the field as well as for training purposes. Thus the agency has been forced to ration ammunition based on internal requests until it can award a new contract.

According to a Justification and Approval known as a J&A, document, the ICE Office of Firearms and Technical Programs (OFTP), ordered more ammunition in March.

ICE and other law-enforcement agencies are reaching a “critical stage,” as their 9mm ammunition is being depleted. Moreover, many thousands of their service handguns approach the end of their life-cycle.

Given how Obama viewed ICE, this gross neglect comes as no surprise. After all, it’s only the lives of law enforcement at stake.

Based on present inventories, ICE estimates the agency would have run out of 9mm ammo by June 2017. Thankfully the modified contract with its supplier, Vista Outdoor Inc. was placed. This contract authorized a $363,307 ceiling increase to contract No. HSCEMS-11-D-00002.

Because of the very poor redaction of J&A, this gross negligence would have likely been missed. 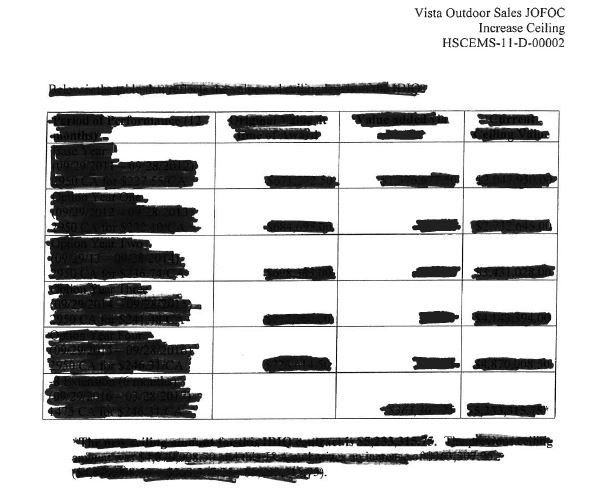 As you can clearly see, the “redactions” allow a person to still read the document.

Thus, the contract extension cost and annual ammunition purchases under the original contract can be determined rather easily.

WND took issue with the bidding process; however, the issue most worrisome to me is the neglect of LEO by the Obama administration. As we all know by now, Obama has no love lost for the police and other law enforcement agencies.

The lack of ammunition to protect border patrol, for example, indicates how little regard the man had for the people who protect the American citizens.