Obama’s been holding secret meetings with everyone from billionaire Warren Buffet to the tech moguls of Silicon Valley. 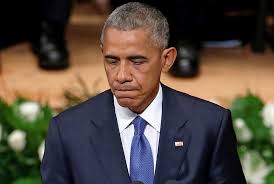 Of course the secret meetings were supposed to be completely concealed. Mums the word, or so Obama thought. Unfortunately for Obama, at least one news outlet is calling this part of the “shadow presidency.”

Obama let his supporters know he wasn’t leaving D.C. He’s been sitting on the sidelines undermining Trump at every turn. Now Obama wishes to expand his sphere to business leaders.

“I would be surprised if he did not spend a significant amount of his post-presidency time and effort connecting the resources and ideas and capabilities that he has learned about in Silicon Valley with the kinds of causes that he will choose,” said Reid Hoffman, executive chairman and co-founder of LinkedIn.

However, since the inauguration of President Donald Trump, Obama is reported to be at the center of the effort to oppose Trump’s presidency.

Obama used his daughter as a reason for staying in D.C. He stated he would remain until she graduates. However, that is a farce. Kids move all the time. They can see their friends on Facebook. Obama stayed to sabotage Trump.

According to Rush Limbaugh, liberals are  “attempting to sabotage the Trump presidency and do everything they can to either render it meaningless and ineffective or to get him impeached or force him to resign.”

Rep. Mike Kelly agrees. Additionally, he says Obama’s one and only purpose here has nothing to do with graduating his daughter. Obama aims to completely disrupt the Trump agenda with his shadow government. Kelly added that Obama’s actions just don’t make sense.

Silicon Valley is actually an obvious ally for Obama. Tech giants are angered by the travel ban, as they employ a large number of immigrants. Furthermore, most backed crooked Hillary.

Regardless, Trump will win in the end. Many companies have learned the hard way: opposing Trump portends disaster. Nordstrom and Macy’s can attest to that.

More importantly, supporting the president can be good for business. President Trump understands that both sides must win. And he also realizes that he has more negotiating power than ever before.

Try what he may, Obama will be as ineffective at disrupting President Trump long-term, as he was at president.