The ‘Real’ Trump-GOP News Event That The Media Covered Up

Take A Look At This Pic…What Do You See?

We know what mostly the mainstream media reported. The San Francisco Chronicle enlightened its readers:

A debate around decorum in the executive mansion exploded in the Twitterverse Monday night when photos surfaced of White House Adviser Kellyanne Conway casually sitting on an Oval Office couch with her legs tucked under her.

The series of images from the event reveal that Conway situated herself in the bizarre sitting position to take a photograph of President Donald Trump meeting with well over three dozen leaders of historically black colleges and universities.

And set off a Twitter Storm of offensively-sexist postings: 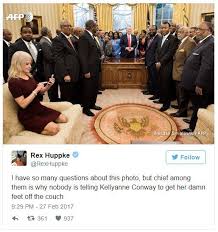 To the downright disgusting! 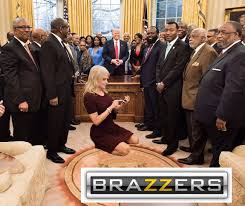 Keeping it classy there Olbermann.

Imagine if such grotesque shaming had been done to Michelle Obama? Many would say “The elegant Michelle Obama would never put her feet on the furniture!”

Oh really? Look at these: But those pics were ‘in the Residence,’ not ‘the Oval Office!’  Alrighty then…

On The Resolute Desk?  Really??? 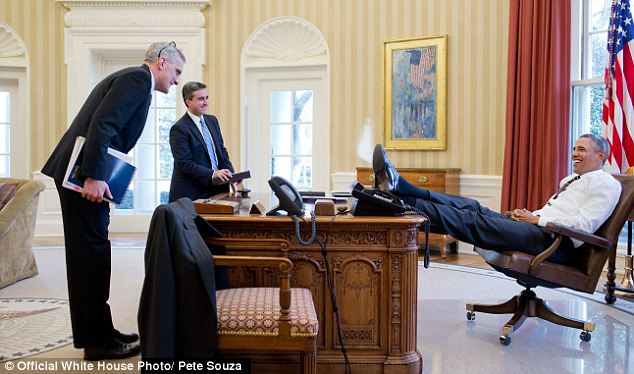 We all have seen the pic and heard the loop-story on cable news ad nauseam this week.

Did anyone catch the ‘second part’ of that report?  Let me repeat that again from the Chronicle:

A photograph of President Donald Trump meeting with well over three dozen leaders of historically black colleges and universities.

Donald Trump was meeting the heads of major historically black colleges and universities!  Why?  What was going on?

PBS NewsHour gave one of the few honest reports of the event:

President Donald Trump signed an executive order Tuesday aimed at signaling his commitment to historically black colleges and universities, saying that those schools will be “an absolute priority for this White House.”

HBCU presidents are hoping Congress will bolster Trump’s actions to strengthen the schools with dramatically increased funding in the upcoming federal budget. They are calling for $25 billion for infrastructure, college readiness, financial aid and other priorities. Under President Barack Obama’s administration, historically black colleges and universities received $4 billion over seven years.

She praised the schools for identifying a system that wasn’t working — “an absence of opportunity” — and taking it upon themselves “to provide the solution.”

“They started from the fact that there were too many students in America who did not have equal access to education,” she said of the schools.

“HBCUs are real pioneers when it comes to school choice. They are living proof that when more options are provided to students, they are afforded greater access and greater quality.”

However well-intentioned, her statement triggered backlash among HBCU supporters who said she failed to acknowledge the real reason for their creation.

HBCUs arose in response to racist Jim Crow laws in the American South that enforced segregation, shutting out black students from traditionally white schools with a few exceptions.

Tone-deaf, uninformed statement from DeVos. #HBCUs weren’t “more options” for black students – for many years, they were the ONLY option. pic.twitter.com/fD58rXpHIt

Will someone PLEASE remind the Liberal-Left that it was DEMOCRATS who established Segregation and Jim Crows Laws!  Required reading can be found:  Here1, Here2, Here3, Here4, Here5, and on government-taxpayer supported PBS!  Ironically neither Congressman Ellison or Congresswoman Lee were in attendance for any of the daylong meetings.  In fact, anyone notice there were not any Democrats in the room!

And how about Dr. Gasman?  Why was she not in attendance?  A white Liberal academic elitist who claims to be the “authority on HBCUs” aloft her ivory tower at the University of Pennsylvania (BTW…President and Ivanka Trump’s alma mater).  Whereas ninety HBCU presidents and chancellors, and representatives from the United Negro College Fund were there and met with the President and key Republican leaders.

And Now…The REST Of The Story!

McClatchy News provided details of how the HBCU presidents met with Senator Tim Scott, House Speaker Paul Ryan, Congressman Mark Walker, and other GOP lawmakers.  They were meeting this week to address their concerns on funding scholarships and assist with upgrading infrastructure.  So why did most of the mainstream media ignore this daylong event, and chose to run two days of slander? It was also a discussion largely absent during President Barack Obama’s tenure, say some HBCU officials who were disappointed in Obama for not making the schools a priority and, in some cases, harming their financial health and contributing to declining enrollment with changes his administration made to loan programs.

“Frankly, the attention we’ve received in the last 45 or so days exceeds not just this past administration, but the last three or four administrations,” said Johnny C. Taylor Jr., president and CEO of the Thurgood Marshall College Fund, a nonpartisan advocacy group for 47 publicly supported HBCUs.