You have to love when these sanctimonious senators try to play “gotcha” politics with people who actually work for a living.

And when the job is to judge, that work carries extra responsibility. 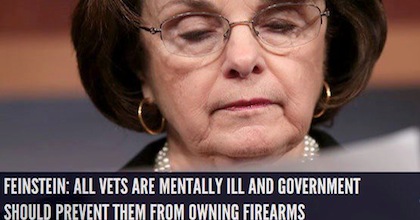 Democrat Senator and ranking member of the Senate Judiciary Committee Dianne Feinstein, on the other hand, is a hypocrite.

Once it was discovered that anti-gun Feinstein had a conceal and carry permit, she then gave up the gun.

Sen. Dianne Feinstein (D-Calif.) no longer has a permit to carry a concealed weapon.

Feinstein, who has taken the lead on efforts to renew a federal assault weapons ban, acknowledged during a hearing in 1995 of previously having a concealed weapon permit.

At the time, she said she needed it for security, but she has since dropped the permit.

“The senator does not have a concealed weapon permit,” Feinstein spokesman Tom Mentzer said in an email to The Hill on Thursday.

In 1995 a hearing on terrorism after the Oklahoma City bombing, Feinstein recounted how, in the 1970s, she was the target of the New World Liberation Front which first attempted to blow up her home. After the bomb failed to detonate, Feinstein explained, she decided to arm herself.

Feinstein and Dems Destroyed by Gorsuch

She doesn’t have to testify before a committee and answer questions about her record. All she need to do if fool the morons who vote for her.

I watched the video of her implying that Judge Gorsuch ruled against the “little guy”. Watching Feinstein I was reminded of yet another bureaucrat who had outlived her usefulness in politics.

Feinstein attempted to paint Supreme Court nominee Neil Gorsuch as a corporate fat cat sympathizer. She asks him a loaded question with implications that Gorsuch was a heartless Conservative who smashes the little man.

As Gorsuch started to answer, Feinstein’s discomfort began to show. Because Gorsuch responded with a list of cases where he fought for the “little guy” throughout his career.

Recently she went on a snipe hunt and came up empty.

Sen. Dianne Feinstein (D-Calif.) told CNN Thursday that it is a “distinct possibility” that she and other Democrats on the Senate Intelligence Committee could try to force President Trump to release his tax returns through a subpoena.

What will Feinstein do now to try to make trouble for President Trump?