Actor, musician and activist Gary Sinise, well-known for his stalwart support of America’s military personnel gets the recognition he deserves.

The Association of the United States Army selected Sinise for its highest award for public service – the George Catlett Marshall Medal.

Lieutenant Dan is a bona fide hero on and off the silver screen.

Sinise has advocated for America’s service members for almost forty years. In the 1980s, he supported Vietnam Veterans groups and helped create Vets Night – offering free dinners and performances to veterans at the Steppenwolf Theatre in Chicago. 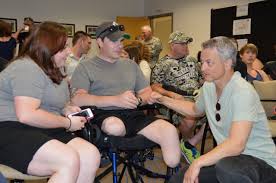 His heartfelt performance as Lieutenant Dan, a severely wounded combat veteran, in the landmark 1993 film Forrest Gump, formed an enduring connection with America’s servicemen and women. Since then, Sinise has come to work closely with wounded and disabled veterans.

In 2011, Sinise established the Gary Sinise Foundation to serve and honor the military, first responders, and their families. Through unique programs that entertain, educate, inspire, and build communities, these projects help:

Commenting on the incredible importance of supporting America’s military, first responders, and their families, Sinise has said:

“Freedom and security are precious gifts that we, as Americans, should never take for granted. We must do all we can to extend our hand in times of need to those who willingly sacrifice each day to provide that freedom and security. While we can never do enough to show our gratitude to our nation’s defenders, we can always do a little more.”

USO facilities are a refuge, welcoming and refreshing weary troops on their way to some very war-torn places. In recognition for his many USO tours to dangerous locations to meet and support our troops, many USO facilities proudly display an autographed photo of Gary Sinise.

Over the years, Sinise received multiple awards for his selfless service to the military and first responders. These include:

It takes an incredible person to use their celebrity status in such a sacrificial way for the betterment of mankind.