“This is a man who is out of touch with our state’s values, who doesn’t represent the initiatives that we have, and I think most importantly would be very dangerous for us economically.”

And the son of the man who couldn’t convict OJ had good reasons to believe this at the time.

Republicans have not won California in a presidential election since 1988, and the Democrats have had a lock on every statewide political office since 2010.

This year is also unusual because Californians are still feeling the effects of Donald Trump’s victory in the presidential contest and are still reacting, both positively and negatively, to the results, she (Mindy Romero of UC Davis) said. 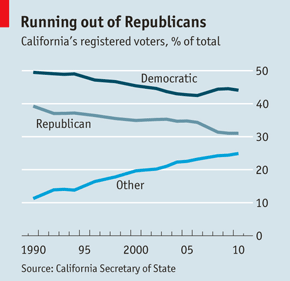 This would fall in line with the dismal headlines regarding the President’s recent approval numbers less than 100 days into his presidency.  But…this is California we are talking about, and Trump is the President…so throw conventional wisdom out the window because things are going to get a little looney.

But the new UC Berkeley Institute of Government Studies numbers are quite surprising. California voters want Democrats to work with the Trump Administration. The San Jose Mercury News summarizes:

The poll reveals that “by a 53% to 47% margin, slightly more voters prefer that when state leaders disagree with the president they should try to work with him even if it means making compromises, rather than opposing him if it risks negative consequences and losses in federal funding.”

Voters prefer that Democrats work with Trump even though 61% disapprove of the job he is doing, according to the poll, which surveyed 1,000 registered voters and has a margin of error of 3.6%.

38% of California’s registered voters approving of his illegal immigration policies and 49% disapproving.

Mark DiCamillo, the Director of the poll, added further insights to the Sacramento Bee:

“Nonpartisan voters typically show you which way the wind is blowing. That’s what’s revealing to me here,” said Mark DiCamillo, director of the poll. He noted that Brown has come to transcend his party in many respects.

Asked to assess a dozen policy areas under Trump, more Californians foresee negative consequences in 10 of the sectors, including preventing terrorist attacks, energy production, illegal immigration, health care and the rights of minorities.

Two categories where Trump’s proposed changes in federal laws and policies are seen as more positive than negative relate to his pledges to improve highways, bridges and dams and on how he’ll handle jobs and the economy.

Even the far-Left Coast of California is slowly beginning to wake from their socio-progressive stupor and are starting to think with their wallets.

Californians have the highest average median income in the country. Despite that, as the Silicon Valley Business Journal learned, all that glitters isn’t always gold:

At $94,572, the region’s 2013 median household income dwarfed both California’s statewide $61,320 median and the nationwide $53,291 median, according to a new analysis of federal data by think tank Joint Venture Silicon Valley. The proportion of households in Silicon Valley bringing in more than $150,000 per year also jumped from 26 percent to 29 percent last year.

That increase reflects the dynamism of a market rapidly adding high-paying jobs in fields like engineering and finance. But that picture of prosperity is clouded by declining economic mobility for those in lower-wage jobs and a decline in middle-class jobs, which doesn’t mesh well with skyrocketing costs of living. Supply and Demand. Inflationary cost of living adjustments (COLA). Lack of available disposable income. Wiping out of the middle class.

And while Californians earn the highest salaries, they also contend with:

In other words, the State is a mess.

“Never Let An Opportunity Go to Waste.”  Unless You’re A California Republican.

This poll should be ‘required reading’ for every Republican political candidate and political consultant in the State going into 2018.  These results could be used to establish a political foundation with many messages. Like ‘working in a bipartisan manner’ to ‘improve the economy,’ ‘increase jobs,’ ‘improve infrastructure,’ and ‘practicing fiscal responsibility.’ But the California Republican Party is a mess, nearly broke. Further, the party has been written off as irrelevant by the State’s media.

The top three potential gubernatorial candidates, San Diego Mayor Kevin Faulconer will not commit, former-Fresno Mayor Ashley Swearengin has said she is not interested in running, and businessman Peter Thiel continues to stumble out of the gates.

The State Party needs to be competitive in 2018 or risk getting shut out like what happened in 2016. It must knuckle up and start going on the political offensive or it will get passed by again.

President Trump has provided a blueprint of key issues for Republicans. He accomplished this despite the lack of support from much of the State’s GOP stalwarts. Regardless, now Republicans can pursue the ever growing Independents, and the remaining handful of the State’s Blue-Dog Democrats.

Or, they can continue to fight amongst themselves for the remaining scraps within their ever shrinking gerrymandered district fiefdoms.