The term so angered CNN, they had their anchors fighting against the term.

One even through a hissy fit, and walked off set.

CNN hoped the term would die down, as they attempted to “fake news” their way out of it. CNN news anchor Cuomo actually said using the term “fake news” was the equivalent of using the “n-word.”

The media giant seemingly didn’t get the hint that to avoid being fake news all one need do is stop reporting fake news.

That said, President Trump may be pleased when he sees their reporting on the stock market’s rally since he took office. Interestingly, CNN got closer to the truth than normal.

The Trump rally has come in three waves. It was kicked off soon after the election with exuberance over the Trump agenda. It was dealt a blow by political reality, and has since matured into cautious optimism.

All in all, the stock market performance through President Trump’s 100th day in office on Saturday looks impressive. That’s especially true given Trump’s historically-low poll numbers and nonexistent legislative achievements, at least so far.

The S&P 500 has rallied 11.6% between Trump’s election victory and Friday, the final day before the 100-day mark. That’s the second-best performance for that period, since an 18% surge under President Kennedy in 1961, according to CFRA Research. The S&P 500 soared 12.3% through the same point under President George H. W. Bush in 1989.

“Wall Street has awarded President Trump an A for ‘anticipation,'” Sam Stovall, CFRA’s chief investment strategist, wrote in a report.

Anticipation of a pro-growth policy — massive tax cuts, infrastructure spending and deregulation — fired Wall Street up immediately after the election.

So much so that most of the Trump rally actually took place long before he ever took power. Roughly 53% of the S&P 500’s total post-election rally happened by December 13, according to an analysis of FactSet data.

Ok, so this is a back-handed endorsement of President Trump. But for CNN, this is not too bad.

Note the date of their claim that 53% of the S&P 500’s total happened from election day until December 13. What they fail to mention was the prediction that the election of Donald Trump would cause the worldwide collapse of, well…everything!

Mexican billionaire Carlos Slim said on Friday that Donald Trump’s plans would “destroy” the United States economy and joked that the Republican presidential candidate’s proposed wall at the border would be undermined by smuggling tunnels.

According to the Washington Post, America should be in the apocalypse by now.

They explain away the $10 trillion added by Obama, as well as his massive deficits as such. 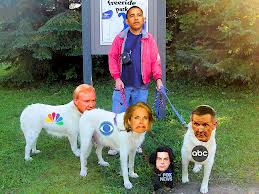 THE DECADES since the end of the Cold War have seen strong and widely shared economic growth, on a global scale. The portion of the world’s population living on $1.25 per day or less fell from 44 percent to 23 percent. Some 200 million Chinese, 90 million Indians and 30 million people each in Indonesia, Egypt and Brazil moved into the global middle class. This progress had many causes, but a major one was the United States’ hard work, under presidents of both major parties, to promote the free flow of goods and capital, within a robust legal framework, among nations.

These policies benefited the American people, too — though by no means all of them, a fact that has caused understandable concern, especially in the wake of the 2008 financial crisis. Seizing on this backlash, and dissenting radically from the long-standing bipartisan consensus, Republican presidential nominee Donald Trump speaks of “bringing back” American jobs by repudiating international trade agreements and resorting instead to pressure tactics, such as threatening tariffs against China and other trading partners.

The United States needs to ensure that more of its own middle class shares in the benefits of globalization. Mr. Trump’s policies, however, could trigger a trade war, or wars, thus threatening the achievements of the past three decades without helping Americans who need it most.

The Atlantic predicted gloom and doom not only for America, but for the world.

Trump isn’t just bad for his business. He’s not even just a danger to the U.S. economy. Investors around the world think that a President Trump would be disastrous for global markets. And now, there is hard data to prove it, thanks to two clever economists and one debate meltdown.

They even referenced their OWN article as material for the impending doom of a Trump presidency. What concerned them most was this quote from Trump:

“I’ve borrowed knowing that you can pay back with discounts,” he told CNBC. “I would borrow knowing that if the economy crashed, you could make a deal.”

How exactly do the people at The Atlantic think America currently finances its debt?

Finally, across the Atlantic, the Brits chimed in. The Independent UK wrote this:

Things might not turn out like that. Perfectly plausible is that Trump’s victory will instead prove the catalyst for the next financial crisis. In truth, that crisis has been in the making for many decades and it will represent the third chapter in the trilogy that has the banking crash and the great recession as its first two episodes: the great dollar crisis of 2017 will be the final reckoning of the long boom and the era of financial irresponsibility.

The era of financial irresponsibility JUST ENDED! But leave it to Brits to get the memo late.

Anyway, as you can see, the Left were not kind to candidate Trump. Don’t expect them to start now. Know that President Trump’s only concern is good results. And if his first 100 days are any indication, America is coming back!