Leave it to Leftists to create a day for a murderer.

Ira Einhorn was on stage hosting the first Earth Day event at the Fairmount Park in Philadelphia on April 22, 1970. Seven years later, police raided his closet and found the “composted” body of his ex-girlfriend inside a trunk.

A self-proclaimed environmental activist, Einhorn made a name for himself among ecological groups during the 1960s and ’70s by taking on the role of a tie-dye-wearing ecological guru and Philadelphia’s head hippie. With his long beard and gap-toothed smile, Einhorn — who nicknamed himself “Unicorn” because his German-Jewish last name translates to “one horn”  —advocated flower power, peace and free love to his fellow students at the University of Pennsylvania. He also claimed to have helped found Earth Day.

What a perfect representative of Leftism.

Einhorn wanted to save the Earth, but not his girlfriend.

I love how the article goes on to comment that Einhorn had a “dark side.” You think?

ALL Leftist have a dark side, and they don’t even bother to suppress it. Leftists commit their dirty deeds, then apply their moral relativity.

Take for example Einhorn. He preached against the Vietnam War, but then waged Leftist jihad on his girlfriend.

But the charismatic spokesman who helped bring awareness to environmental issues and preached against the Vietnam War — and any violence — had a secret dark side. When his girlfriend of five years, Helen “Holly” Maddux, moved to New York and broke up with him, Einhorn threatened that he would throw her left-behind personal belongings onto the street if she didn’t come back to pick them up.

So what the man had a bit of a problem with his temper? He was TRYING TO SAVE THE PLANET! 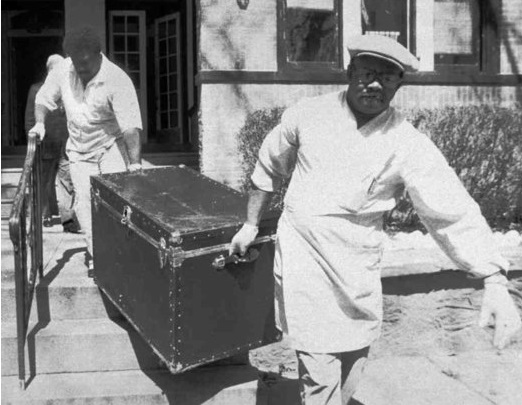 So, on Sept. 9, 1977, Maddux went back to the apartment that she and Einhorn had shared in Philadelphia to collect her things. However, she was never seen again.

Philadelphia police questioned Einhorn about her mysterious disappearance several weeks later. But he blamed her disappearance on tofu. This beatnik actually claimed that she had gone out to the neighborhood co-op to buy some tofu and sprouts and never returned. Most people say their dead and composting partner went to get some smokes.

Fast-forward 18 months and investigators were called by Einhorn’s neighbors to check out the reddish-brown, foul-smelling liquid was leaking from the ceiling directly below his bedroom closet. When police checked things out they found Maddux’s beaten and partially mummified body stuffed into a trunk.

But that’s not the worst part of the story.

Einhorn had packed the trunk air fresheners and newspapers, and…STYROFOAM!

It’s ok to kill the chick that’s busting on you when you’re trying to SAVE THE WORLD. But using styrofoam? That’s simply unforgivable.

Einhorn was arrested. But the man who wanted to save Earth could not be held to mortal standards. Thus, Einhorn jumped bail and spent decades evading authorities by hiding out in Ireland, Sweden, the United Kingdom and France. Finally, after 23 years Einhorn was extradited to the United States from France, where he was tried.

In what many Leftist now use when the race card is not available, Einhorn blamed the CIA.

Taking the stand in his own defense, Einhorn claimed that his ex-girlfriend had been killed by CIA agents who framed him for the crime because he knew too much about the agency’s paranormal military research. He was convicted of murdering Maddux and is currently serving a life sentence.

This defense has morphed into what is known in Leftist circles as “The Russian Gambit”. The defense can be used successfully when not overused.