Since the end of the 2016 election, ESPN has been performing a public, albeit quiet, mea culpa concerning their one-sided political slant.

Brady admitted as much in his December article:

ESPN is far from immune from the political fever that has afflicted so much of the country over the past year. Internally, there’s a feeling among many staffers — both liberal and conservative — that the company’s perceived move leftward has had a stifling effect on discourse inside the company and has affected its public-facing product. Consumers have sensed that same leftward movement, alienating some…. For most of its history, ESPN was viewed relatively apolitically. Its core focus was — and remains today, of course — sports. Although the nature of sports meant an occasional detour into politics and culture was inevitable, there wasn’t much chatter about an overall perceived political bias. If there was any tension internally, it didn’t manifest itself publicly.

The liberal tension was there, and the viewers felt it. 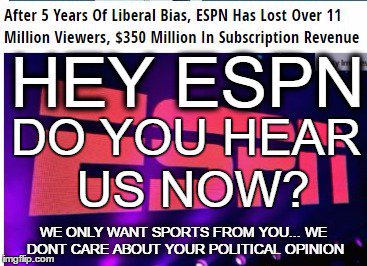 From the lauding of Caitlyn Jenner to the shaming of Curt Schilling to abandoning Donald Trump’s golf courses, ESPN has been accused of becoming a left-leaning media factory.

After the way it covered women’s marches the past two weekends, The Worldwide Leader in Sports can officially join the Democratic National Committee, Planned Parenthood, MoveOn.org and Madonna’s Fan Club.

The Women’s March on Washington got lavish coverage from ESPNW. The March for Life did not register a blip on the women’s-oriented website.

Maybe you don’t see that as a problem, but ESPN should.

If nothing else, you’d think ESPN would want to at least acknowledge a huge market share. A Gallup poll last spring found that 47 percent of Americans described themselves as pro-abortion and 46 percent as anti-abortion.

My bet is at least a few of the anti’s are sports fans. They might have read about ESPN’s drive for fairness and its commitment to the twin totems of diversity and inclusion.

ESPN like other media conglomerates ventured off its original mission of presenting sports entertainment and veered into shaping ideology.

Therefore, this could be a first step in reaching out to center-right/conservative viewers. This audience has been alienated over the last several years. Thus, they ultimately ‘voted’ with their TV remotes.

If ESPN wants to win them back, they have a lot of work ahead of them as Sporting News discovered:

In a survey conducted by Barrett Sports Media, a sports media consulting company, 60.8 percent of respondents said the network has a “left-leaning agenda.” Only 3 percent said ESPN tilts right politically.

Still, a significant portion of respondents — 36.2 percent — believe ESPN is neutral. Or they couldn’t detect bias.

The majority of the 1,363 people who completed the survey March 7-14 were “sports media consumers,” said Jason Barrett, owner of Barrett Sports Media. His 10-question ESPN survey uncovered some other troubling indicators for the Worldw Asked how they feel about the “current state” of ESPN TV shows, a majority (52.5 percent) called them “weak.”

Barrett got a similar response when he asked about ESPN’s on-air talent.

Among current shows on the air, respondents like “First Take” and “SportsCenter” the least.

The most-liked shows are “Pardon the Interruption,” “Baseball Tonight” and “College Gameday.”

Kevin Jackson - May 12, 2021
Parts of New York City may be safe again. All because Mayor Bill de Blasio was forced to backtrack on a commitment he made...

Psaki Announces Plans to Step Down