America shouldn’t dare build a wall to protect itself. So say leftists.

So, for Trump-loving Spring Breakers to go to Cancun and chant, “Build that wall!” would be disastrous.

Obviously, Trump brainwashed Millennials into this behavior, just as he beguiled them into voting in massive numbers for him.

As it turns out, this story was {cue villain music}…fake news.

As the Washington Beacon reported,

A much-reported story about American spring breakers chanting “Build the Wall” while vacationing in Cancun lacks any concrete proof, according to a reporter on Wednesday who looked into the incident.

Anaximandro Amable Burga, a Peruvian man honeymooning at the popular Mexican tourist destination, made the allegation in a March Facebook post. Amable claimed that while he was on a cruise in Cancun a group of inebriated Americans got on the boat and began to chant the popular anti-immigration phrase “build the wall.”

Anybody know who the president of Peru is? WITHOUT GOOGLING IT?!

Exactly. Don’t know and who cares.

Yet, a Peruvian takes a page out of the “Stupid Things Leftists Do in America” playbook, and attempts to cause an international incident.

From there, the local English-language Yucatan Times discovered the story and denounced the Americans in question on March 17.

The story got even more legs when it was picked up by the Drudge Report, amongst other outlets like Yahoo, Fox News, and the Huffington Post. 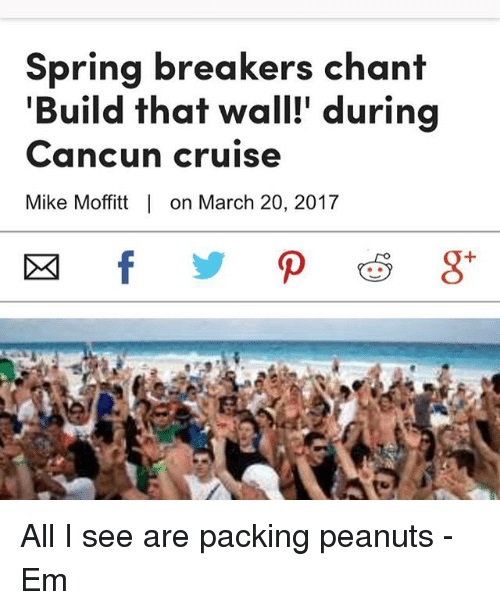 They only mentioned HuffPo on the Left. So, I looked to see if additional “fake news” outlets picked up the story. Unfortunately, I found only ABC, when I decided to stop looking.

I stopped because I thought: leftist outlets likely started the fake news rumor.

As the article suggests, only a British left-leaning rag decided to check out the story.

But left-leaning UK paper The Guardian did what other outlets didn’t: they sent a reporter to Cancun to look into Amable’s claims. Their man on the ground Rory Carroll found there was no evidence it ever happened.

Carroll reports that in general, locals disputed the notion that there was a rash of boorish Trump supporters following the election.

What The Guardian’s reporter discovered

“Trump? The breakers don’t really mention him,” said one nightclub promoter. “If they do it’s usually to say ‘F*** Trump.’ ”

The best the staff could suggest was that the chant was brief and happened when none of them were around. “I’d have thrown them to the sharks,” joked one.

Amable did not answer any questions about the incident.

Amable didn’t answer questions about the incident because it didn’t happen. Further, if you dig deeper into Amable you will find that he has some connection to Democrats in America. Perhaps a student or even “media.”