The woman who stomped on the rights of Conservatives to further the cause of lunacy may get her punishment.

The IRS executive attacked Republican groups for their political beliefs in an effort to keep Democrats in office. Because Obama refused to acknowledge the scandal, Lerner beat the rap.

The Hill observed that:

“Lois Lerner, the central figure in the IRS targeting controversy, called Abraham Lincoln the country’s worst president in an email disclosed in a bipartisan Senate report.”

“Lerner, the former IRS director of Exempted Organizations, joked in one email that the 16th president should have just let the South secede, rather than fighting the Civil War.”

Now, Justice barrels towards her in the form of a class action lawsuit.

The information likely to come from her revelations caused Lerner to ask that her testimony is sealed. Lerner says that to do otherwise opens her up to threats by Republicans.

As the Washington Times noted: 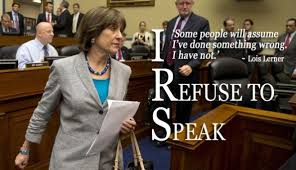 “Former IRS senior executive Lois G. Lerner told a federal court this week that she faces the possibility of death threats if her role in the tax agency’s tea party-targeting becomes public, and asked a judge to forever seal her upcoming deposition in a class-action lawsuit brought by hundreds of groups that were targeted.”

“Lerner and Holly Paz, another figure from the IRS tea party targeting, told the judge they’ve already faced “harassment and death threats” before, and said they fear another media firestorm if their version of events from the tea party targeting were to become public.”

Now Lerner finds herself the victim?

America watched as the kangaroo court allowed Lerner and the many other IRS employees who aided and abetted her went free. Leftists claimed that the controversy only involved a handful of people at one location.

So what. Isn’t that how ALL conspiracies begin?

Then for Lerner to avoid the light of day in her testimony under the pretense that Republicans will want her head? And I too believe in Sasquatch, the Yeti, the Lochness Monster and THE TEA PARTY RACIST!

{Note to Leftists: none of the aforementioned have actually been found.}

What Republicans want is justice. Justice for Republicans was sorely lacking in the Era of Obama. And Lois Lerner played a big role in making that happen.

For the woman who tried to ruin the lives of conservatives through virulent hatred, it’s time to face the music.