Nancy Pelosi May Be DUMBEST POLITICIAN EVER: Says Border Wall is a Sign of Weakness [VIDEO]

On Sunday, Meet the Press met up with Nancy Pelosi. By now, they should be prepared for her special kind of stupid.

Pelosi is after all the woman who when asked what’s her favorite word, replied, “Word.”

Pelosi voted for a border wall in 2006. For Leftists, I remind you- this was during the Era of Obama.

Immoral? Like Pelosi’s highly-secured fenced-in home in her gated community?

Expensive? Like the cost of illegal immigration, with estimates as much as $113 billion a year. Estimates to build the wall come in between $12-$15 billion. And as we all know by now, “Mexico will pay for the wall.”

The good news for Mexico is President Trump will get this wall build on time and under budget.

According to The Federation for Immigration Reform (FAIR), the wall is still cheap if it costs twice our predictions.

“No matter who pays for the wall, the project ultimately can be viewed as cost effective.”

I suggest she ask all the citizens of the United States who are victims of violent crimes of illegals?

And what of the workers who lose jobs due to illegals? Or the fact that illegals drive down the salary base, low wages a constant drone by the Left.

“This is about keeping Americans safe,” Ryan said. “We are committed to working with the administration to stop the influx of illegal immigration along the southern border, protect our homeland, and uphold the rule of law.

“I applaud President Trump for keeping his promise to make this a national priority.”

Pelosi: "The president…is expressing a sign of weakness. He's saying 'I can't control our borders. I have to build a wall.'" #MTP pic.twitter.com/E5ePOFy5Yz

And Obama “controlled” our borders by allowing millions more illegals to enter?

Further, the Left’s solution to crime is to LEGALIZE IT?

How these lunatics are allowed to govern amazes me.

Pelusi saying building a border wall is immoral. Is like saying putting a fence around my house to keep my kids and dogs safe is wrong right

Speaking of lunatics. I know she doesn't really believe what she's saying here but that's what politicians have become. https://t.co/y43Jx9Nowx

A border wall is none of the things Pelosi described. 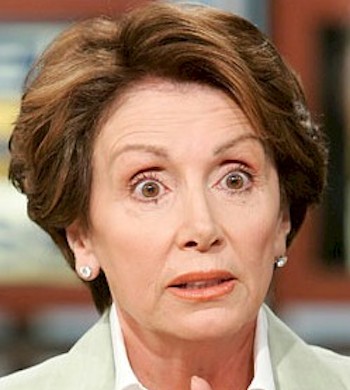 What is immoral is failing to honor our sovereignty and to protect our citizens.

To say a border way is expensive is to say roads and bridges are expensive. Like roads and bridges, the border wall is needed. However, the wall would not be needed if Leftists honored our Constitution, ergo laws, and implemented policies that prevented illegals from coming to America, thwarting our LEGAL immigration system.

What price do you put on the death of any American citizen? Or the millions of jobs taken by illegals? And what of the money drained from the economy as they send billions back to their countries of origin?

Leftists never ask these questions when dealing with illegal immigration, but instead discuss the humanitarianism of allowing criminals in our midst.

As with all things Leftists say or do, the truth is counter to their argument. Building a border wall is a sign of strength, not weakness.