FAST AND FURIOUS RETURNS: ‘Scandal-free’ Obama and his Henchman Holder on the Firing Line Again

It’s funny how the “scandal-free” administration of Obama suddenly finds itself embroiled in scandals.

Obama kept a tight lid on scandals, threatening most of the press corps, and of course all the scurrilous politicians in DC. Honestly, if it wasn’t for his “black book,” Obama might be rotting in a federal prison. 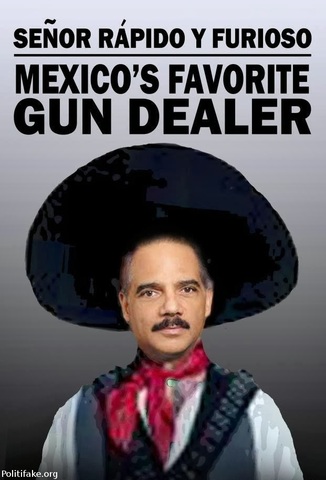 And what of Eric Holder? Certainly, Americans would feel that justice was served if that a-hole received some prison time.

Aside from the scandal of the Left’s creation that backfired, aka Russia-Gate, others have begun to resurface.

A $250,000 reward had been sought for information leading to the arrest of Osorio-Arellanes, who was captured at a ranch on the border of the Mexican states of Sinaloa and Chihuahua. U.S. authorities have said they will seek his extradition.

Recall the incident that took the border patrol agent’s life.

Terry was killed on Dec. 14, 2010 in a gunfight between Border Patrol agents and members of a five-man cartel “rip crew,” which regularly patrolled the desert along the U.S.-Mexico border looking for drug dealers to rob.

The agent’s death exposed Operation Fast and Furious, a Bureau of Alcohol, Tobacco, Firearms and Explosives (ATF) operation in which the federal government allowed criminals to buy guns in Phoenix-area shops with the intention of tracking them once they made their way into Mexico. But the agency lost track of more than 1,400 of the 2,000 guns they allowed smugglers to buy. Two of those guns were found at the scene of Terry’s killing.

The operation set off a political firestorm, and then-Attorney General Eric Holder was held in contempt of Congress after he refused to divulge documents for a congressional investigation.

Let’s hope that President Trump revisits some of these scandals.

Then, when the truth comes out hold the Obama administration accountable.

Americans need to feel that no person is above the law. Restoring that faith to the public would be priceless.