In most cases, his EO coincide directly with his promises to the American people during the campaign. To that end, many of his EO undo the damage done to America by his predecessor. 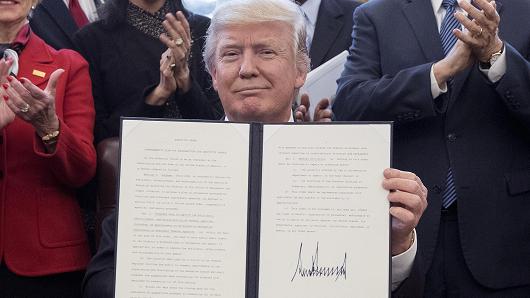 Below is a current list of the new president’s executive actions:

1. Providing “relief” from the Affordable Care Act (January 20)
Trump’s first executive order on Inauguration Day involved “minimizing the economic burden” of the Affordable Care Act. This order allows the Secretary of Health and Human Services and the heads of other departments and agencies to waive or delay the implementation of any ACA provisions that would impose a financial burden or any state or a regulatory burden on any individuals.

2. Freezing all regulations (January 20)
This type of EO is “standard operating procedure,” as many presidents impose last-minute legislation that could be counter to that of the incoming administration. That was certainly the case with Obama. Thus, Trump froze all pending regulations until they are approved directly by his administration or by an agency led by Trump appointees. The action, given in a memorandum from White House chief of staff Reince Priebus, delays all regulations with the exception of health, safety, financial or national security matters allowed by the Office of Management and Budget director.

3. Reinstating the “Mexico City” abortion policy (January 23)
The president reinstated the so-called “Mexico City Policy”, which blocks the use of U.S. taxpayer dollars to fund foreign non-governmental organizations that perform or promote abortions. It was established by former president Ronald Reagan and has been rescinded by Democratic presidents and reinstated by Republican presidents ever since.

4. Scrapping the Trans-Pacific Partnership (January 23)
Trump’s next executive action withdrew the United States from the Trans-Pacific Partnership, known as TPP. Former President Barack Obama negotiated this horrendous trade deal with 11 other pacific nations. Fortunately, the deal was never ratified by the Senate, so it had not gone into effect. Instead, the Trump administration says it plans on negotiating bilateral deals with individual nations.

5. Freezing the federal workforce (January 23)
Trump issued a presidential memorandum Tuesday that prohibits government agencies from hiring any new employees, effective as of noon on January 22. The order does not apply to military personnel and the head of any executive department may exempt positions that include national security or public safety responsibilities.

6 & 7. Advancing the Dakota Access and Keystone XL Pipelines (January 24)
Trump’s next actions encouraged the construction of two controversial pipelines, the Dakota Access Pipeline and Keystone XL Pipeline. The DAPL action instructs an expedited review and approval of the remaining construction and operation of the pipeline by the Army for Civil Works and U.S. Army Corps of Engineers. The Keystone XL action invites TransCanada, the Canadian energy company behind the pipeline, to re-submit its application for a presidential permit to construct the pipeline. It also instructs the Secretary of State to reach a final determination within 60 days.

9. Promoting “Made-in-the-USA” pipelines (January 24)
In what met with President Trump’s “America First” commitment, this memorandum instructs the Secretary of Commerce to create a plan for pipelines created, repaired or expanded in the United States to use materials and equipment produced in the country “to the maximum extent possible.” It establishes that all steel and metal used in such pipelines be completely produced in the United States, from the initial melting stage to the application of coatings.

12. Pursuit of undocumented immigrants (January 25)
Trump signed an executive order that directed the secretary of homeland security to:

13. Reevaluating visa and refugee programs (Signed January 27, Rescinded March 6)
Trump signed an executive order on a Friday evening, setting off a chaotic weekend at airports as officials did not know how to interpret the order. It was blocked by the courts and rescinded on March 6 when Trump sign a revised order.

14. Strengthening the military (January 27)
The president on Friday issued a presidential memorandum directing the secretary of defense, James Mattis, to conduct a review of the military’s readiness in the next 30 days and develop a budget for fiscal 2018 capable of improving the “readiness conditions.” He also directed Mattis to complete a National Defense Strategy and to review the country’s nuclear capabilities and missile-defense capabilities

15. Reorganizing the National Security Council (January 28)
Trump signed a memorandum that reorganized the National Security Council, with the goal of making it more digitally-focused. Part of the order allows some of the president’s staff, including chief of staff Reince Priebus and White House chief strategist Steve Bannon, to attend any NSC meeting, and widens the ability of appointees close to Trump to attend NSC meetings.

16. Implementing a lobbying ban (January 28)
This executive order bars “every executive appointee in every executive agency” from engaging in “lobbying activities with respect to that agency” for five years after leaving the agency. It also bars them permanently from lobbying for any foreign government or political party.

17. Defeating ISIS (January 28)
This memorandum instructs Defense Secretary Jim Mattis to create a plan to defeat ISIS and submit it to the president within 30 days. The plan must include a comprehensive strategy for defeating ISIS, changes to the rules of engagement, strategies to de-legitimize “radical Islamist ideology,” a plan for cutting off ISIS’ financial support and identification of new partners for the fight against the terrorist organization.

19. Regulating the financial system (February 3)
This executive order lays out a series of principles for regulating the financial system including promoting U.S. corporations’ ability to compete with international companies; to foster economic growth, prevent taxpayer-funded bailouts; and to make regulation efficient. It also instructs the secretary of the treasury to consult with the heads of the member agencies of the Financial Stability Oversight Council and report to the president within 120 days on how current laws and regulations promote those principles.

20. Rethinking Obama’s fiduciary standard (February 3)
This memorandum instructs the department of labor to review the Obama administration’s “Fiduciary Rule,” which required financial advisers to serve the best interests of their clients.

21. Preventing violence against the police (February 9)
This order instructs Attorney General Jeff Sessions to develop strategies for the Department of Justice to use existing federal laws or recommend new legislation to prosecute individuals who commit crimes against law enforcement officials.

24. Enforcing regulatory reform (February 24)
This order instructs each federal agency to designate an official as its Regulatory Reform Officer within 60 days of the order. These officers would oversee the administration’s regulatory reform policy laid out in previous executive orders within their agency.

25. Reviewing the Waters of the U.S. Rule (February 28)
This executive order instructs EPA administrator Scott Pruitt and the assistant secretary of the army for civil works to review President Obama’s 2015 Clean Water Rule that added protections for streams and wetlands under federal clean water rules.

26. Supporting Historically Black Colleges and Universities (February 28)
This order recognizes the importance of HBCUs and establishes an initiative in the Executive Office of the President to increase the role of the private sector in strengthening HBCUs and strengthen the connection between HBCUs and the federal government.

27. Revising the travel ban (March 6)
Trump signed an executive order Monday banning travel from six countries and suspending the U.S. refugee program for 120 days. The ban goes into effect 10 days from the signing of the order. It retools the earlier order that was blocked by the courts. The order:

It’s clear to see that President Trump has committed himself to living up to his promises. Though the economy and the world have felt an immediate positive jolt from the president’s actions, the far-reaching impact of these EO has yet to be felt.