Remember the old adage: “Be careful what you wish for.” Apparently, no one told that to Ariana Grande who wished death upon her fans.

Celebrities rarely consider the possible ramifications of their temper tantrums. Nor do they try to maintain a basic respect when they open their mouths. Therefore, it’s no surprise that Ariana made a few disparaging comments before the mass execution at her concert.

The diva also caused a “total nightmare” at an event for cancer in Los Angeles after fans lined up for hours paying $495 to have their photo taken with her, when Grande then decided she wasn’t in the mood for having her photo taken. At a freaking event FOR CANCER!

“Don’t use natural light” and “Do shoot only from the left side of her face,” one of her handlers could be heard scolding the crowd.

But the remark that Ariana made that forebode the tragedy in Manchester, where 22 people perished and 59 wounded came later.

In addition to wanting all her fans to “f***ing die,” she has been known to make outrageous demands of reporters, where they are not allowed to ask about her “dating, her disastrous Nickelodeon show, a rumored collaboration with Justin Bieber and, perhaps most bizarrely of all, comparisons to Mariah Carey.”

E’s Giuliana Rancic gleefully chimed in after her problems Down Under by claiming the singer was hard to work with at last year’s AMAs. The saucy TV host claimed Ariana nudged her out the way so the camera would get her ‘good side.

I recall watching TMZ, where Ariana was filmed in a donut shop licking a donut she didn’t purchase.

That’s right, the little witch left the donut for the next patron. I believe Elizabeth Warren calls Leftist women like Ariana, “nasty girls”.

And as for disparaging remarks, Ariana has done this before.

I wonder how she feels about Londoners? Muslims?

Regarding Donut Gate, Ariana later apologized, if you can call it that.

In an extended statement posted on Twitter, Grande insisted, “I am EXTREMELY proud to be an American” and explained her comments were meant to be private, aimed at her friend who was purchasing the doughnuts.

She wrote that “food is very important to me and I sometimes get upset by how freely we as Americans eat and consume things without giving any thought to the consequences that it has on our health and society as a whole.”

Her statement went on to discuss child obesity while also noting that she needed to “strive to be better” as a “public figure.”

Me neither. So, let’s recap.

For those of you who were unaware, Ariana declared that Islam is love. I wonder if she still feels the same way. 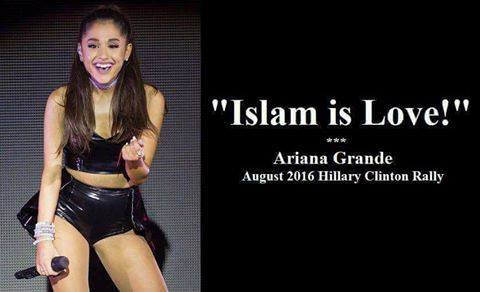 Clearly, Muslims don’t feel the same about her concerts as she does about their religion.

The question begs, “How many people will attend her next concert?” Would you let your teeny-bopper go? I certainly wouldn’t.

Let’s see how the next one goes for Ariana. If a Muslim decides to detonate himself, then we will know that a fatwa has been issued against Ariana’s career. I say this because the money is no longer in the music downloads, but in the concerts. No concerts, no income.

Let’s hope we don’t have to see Ariana working in a donut shop.