It’s Official: America Now Has a REAL Queen and Her Name is Melania

The Left pretended to fawn over Michelle Obama, but we know the deal. Even the fake news media can’t make up for Michelle Obama’s lack of true style.

Melania has style oozing from every part of her body. But she has something Michelle Obama just didn’t have: class

I’m not hammering the former First Lady, as her lack of class wasn’t from trying. Class can be learned, and Michelle eventually acquired a smidgen. However, Melania appears to have been born with it.

In her first overseas jaunt as First Lady, you can see how the world views America’s new First Lady: like a queen.

Look at how France’s First Lady gushes over Melania, as Melania allows her to take it all in.

I’d like to be the first on record that I know of to anoint Melania, Queen Melania.

I suggest conservatives refer to her as Queen Melania just to piss off leftists.

Twitter certainly noted how Queen Melania compared to the wives of other heads of state. Most of the women didn’t even bother to look at the camera, lest they be turned in to pumpkins.

Here is how BizPac Review described the event, 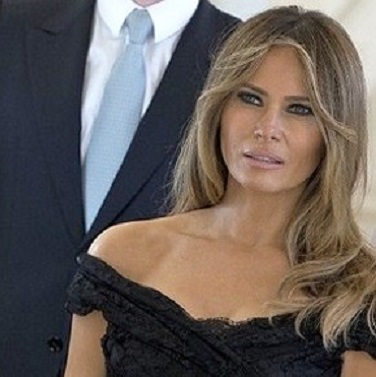 While Melania opted to change outfits, French first lady Brigitte Macron wore the same mini-dress she wore hours earlier as she posed for a group photo with the NATO spouses.

I didn’t check, but I’m betting the American press has said little about Melania’s visit.

To do so would mean they would have to recognize Melania’s class. Inevitably this would lead to the obvious comparisons between Queen Melania and Michelle.

Remember when Sophie Theallet said she wouldn’t design a dress for then-regular Melania? Here’s what I wrote at the time:

How will Melania handle the loss of Michelle Obama’s fashion designer?

Can you believe that “fashion designer” Sophie Theallet considers not designing dresses for Melania Trump a slam? Talk about a pre-emptive strike. As if Melania Trump would hire that hack to dress her.

Has this chick actually seen the crap wardrobe she’s made for Michelle Obama? One of the perks of becoming First Lady is not to look like the homeless.

“Designer Sophie Theallet isn’t a fan of President-elect Donald Trump and has announced she’s refusing to dress the next first lady, Melania Trump.

“As one who celebrates and strives for diversity, individual freedom, and respect for all lifestyles, I will not participate in dressing or associating in any way with the next First Lady,” Theallet wrote in an open letter she posted to Twitter on Thursday. “The rhetoric of racism, sexism, and xenophobia unleashed by her husband’s presidential campaign are incompatible with the shared values we live by.”

Theallet, 52, is a French-born designer who grew to prominence by dressing current first lady Michelle Obama on a number of occasions.”

If Michelle Obama can get a designer prominence, what do you think Melania could do for one’s career?!

For Melania to use Michelle designer would be a BIG, HUGE, no YUUUGGE step down, fashionably speaking.

Melania has upped the class at the White House.

Even the Left knows it.