The Obamas are now elites. The presidency allowed them to practice; at taxpayer expense of course. 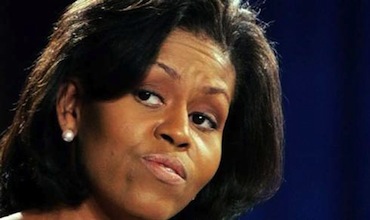 The other day, America’s #2 power couple behind Jay-Z and Beyonce flew to Boston yesterday. Barack and Michelle arrived so that Barack could receive an award.

Who cares what the award was for, as what we know for sure is it was undeserved.

Interestingly, Michelle Obama didn’t fly with her husband. Now that the two are jet-setters and experiencing “white privilege”, Michelle took a separate private jet. Rumors are that the two left from the same airport, just in different planes.

Most of America finds nothing unusual here, as the theory is that Michelle would have Left Barack had he not been elected president in 2008.

Regardless, the couple attended the award event together.

Michelle Obama is not an attractive woman in my opinion. That is not to say she’s a dog, but she’s certainly nothing write home about. Given the couple’s newfound wealth, one would think she would be spot on, no matter where she appeared.

However, no longer First Lady, Michelle seems to be hiding her beauty allowance in a “rainy day” fund. To put it bluntly, Michelle looked rather homely at the event.

But while Michelle was very disheveled, Barack exuded the countenance of a boy as he received his award,.I get the feeling that Michelle has sickened of being Barry’s second fiddle.

One has to believe that Michelle Obama has seen enough of Barry’s ego. Publicly, Barry appears deferential when it comes to his wife. However, behind the scenes (and with Secret Service protection), I’m confident that Barry puts Michelle in her place.

The recent book revealed the scandal about Barack Obama’s past.

The revelation that Obama married Michelle for political expediency ruined the facade of Black Camelot.

Nevertheless, Michelle hasn’t relinquished her role as one of the leaders of the Democratic Party. Like her “get fit” program, and War on Fatties, Michelle Obama is determined to continue failing like Barack.

“To all the students in this graduation series and across this country, I want to congratulate you for reaching higher to get the education you need for the life you want to live,” she said, USA Today reported.

“And to all the young people out there who are still figuring out your next steps, I want to encourage you to keep working as hard as you can and to empower yourself through higher education,” she added. “And then get out there and use that education to give back to your family, your community and your country. Thanks so much and congratulations again to the class of 2017!”

Reach higher? So what have people done who didn’t go to college? According to Michelle Obama, they reached low.

Michelle then did a College Signing Day event on shortly thereafter. And now that she’s an A-lister, Michelle brought an entourage that included fellow A-list celebrities like Nick Cannon and Bella Hadid. I’m sure the students realized that one day they too could end up where Michelle is with their sociology degrees and their “ethnic studies.”