After the Era of Obama, the police feel demoralized.

However, the Era of Trump changes those things substantially.

Due to sane leadership, governors and others can now take bold action to protect law enforcement officers.

According to Detroit News,

Jefferson City, Mo. — Following a spike in deadly attacks on police, more than a dozen states have responded this year with “Blue Lives Matter” laws that come down even harder on crimes against law enforcement officers, raising concern among some civil rights activists of a potential setback in police-community relations.

The new measures build upon existing statutes allowing harsher sentences for people who kill or assault police. They impose even tougher penalties, extend them to more offenses, including certain nonviolent ones such as trespassing in Missouri, and broaden the list of victims covered to include off-duty officers, police relatives and some civilians at law enforcement agencies.

Proponents say an escalation of violence against police justifies the heightened protections.

“What we’re getting into as a society is that people are targeting police officers not by something that they may have done to them, but just because they’re wearing that uniform,” said Republican state Rep. Shawn Rhoads of Missouri, a former detective.

And as predicted, the Leftists are concerned.

People who have been protesting aggressive police tactics are expressing alarm.

“This is another form of heightened repression of activists,” said Zaki Baruti, an activist and community organizer from St. Louis County. “It sends a message to protesters that we better not look at police cross-eyed.”

What a moronic statement.

The people who will kill you over looks are Leftists.

Barack Obama ushered in the worst statistics on police deaths in decades.

Police deaths on the job have generally declined over the past four decades, from a recent high of 280 in 1974 to a low of 116 in 2013, according to the National Law Enforcement Officers Memorial Fund. But they rose last year to 143, including 21 killed in ambushes — the highest number of such attacks in more than two decades. 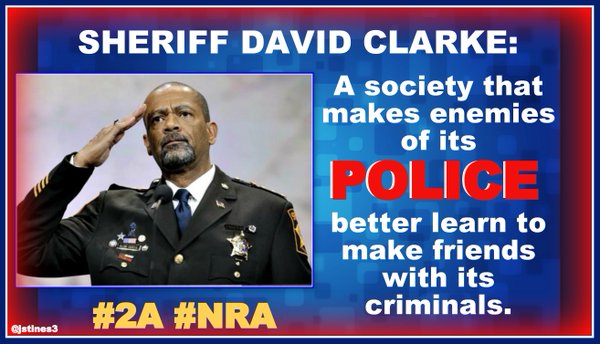 Amazingly, states consider the police a “special” group. And although nearly all states already have laws enhancing the punishments for certain violent crimes against law officers, Louisiana took an even more interesting step.

One year ago, the state became the first state to enact a law adding offenses against police, firefighters and emergency medical responders to its list of hate crimes.

That’s right. Law enforcement became so hated in the Era of Obama that they fall under hate crime protection.

As for the the Missouri legislation, it would add involuntary manslaughter, stalking, property damage and trespassing to the list of crimes bearing enhanced penalties for targeting police. Further, the legislation applies the tougher punishments to crimes involving officers’ spouses, children, parents, siblings, grandparents and in-laws.

It is awaiting the signature of Republican Gov. Eric Greitens, who vowed to put in place “the toughest penalties possible for anyone who attacks a law enforcement officer.”

“Missouri will show no mercy to cowards who assault cops,” he said.

Other states are following suit with variations of Blue Lives Matter Laws.

However, some in Congress want to see this legislation at the Federal level.

U.S. Sen. John Cornyn and Rep. Ted Poe — both Texas Republicans — recently reintroduced the Back the Blue Act that would increase the punishments for crimes against law enforcement officers. It would make killing a judge or police officer punishable by death or a minimum of 30 years in prison.

Let’s hope this type of legislation does go nationally.