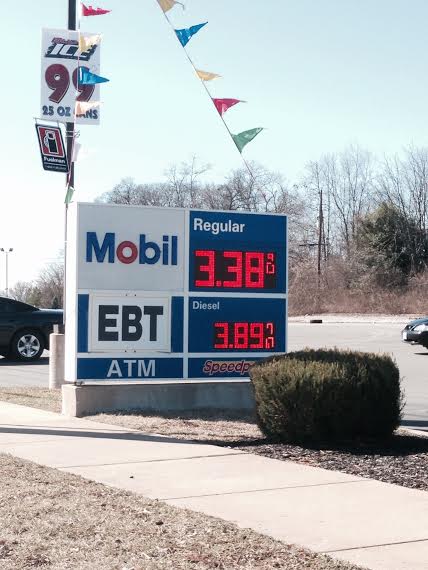 Obama tried to explain how he left things as president. He touted, “in my last days gas is 2 dollars a gallon.” Nice try. What about the six years of paying from $1-$2 over “Bush Era” gasoline? How much did this cost the average family? $15 to $30+ per fill-up or roughly an extra $1000+ a year?

Throw in taxes, and that $1000+ is over $1500+. The price of food soared under Obama. Poor people may not buy planes and yachts, thus avoiding that luxury tax. But people have to eat every day. Also, they also need to drive their cars every day.

They work hard. They pay mortgages on properties that lost over $6 trillion in market value in the time of Obama. So, desperate times call for desperate measures.

We learned that a man driving a Mercedes deliberately ran into three different boutiques, shattering the glass of different storefronts, and various offices.

The vandalizing took place along various luxury shopping centers that attract people from all over the world. The police are currently on the lookout for the man. Police say:

“Based on what we know so far, it appears to be intentional vandalism, not an accident and not an attempt at theft or burglary,” Albanese said in an interview. She said it appeared that the vehicle’s path was “very deliberate.”

Who knows why the vandal did this?

Perhaps he lost his job? Or his store? Maybe he hated the competition?

Whatever the cause, this person fell hard from grace. Hopefully, police can find the culprit, so we can figure out what happened. Usually, people don’t use their Mercedes to commit crimes. Was this a cry for help?

Here are 26 statistics about the middle-class that will shed light on Obama’s economy:

#1 American families in the middle 20 percent of the income scale now earn less money than they did on the day when Barack Obama first entered the White House.

#2 American families in the middle 20 percent of the income scale have a lower net worth than they did on the day when Barack Obama first entered the White House.

#3 According to a Washington Post article published just a few days ago, more than 50 percent of the children in U.S. public schools now come from low-income homes. This is the first time that this has happened in at least 50 years.

#4 According to a Census Bureau report that was recently released, 65 percent of all children in the United States are living in a home that receives some form of aid from the federal government.

#8 Traditionally, owning a home has been one of the key indicators that you belong to the middle class. So what does the fact that the rate of homeownership in America has been falling for seven years in a row say about the Obama years?

#9 According to a survey that was conducted last year, 52 percent of all Americans cannot even afford the house that they are living in right now.

#10 After accounting for inflation, median household income in the United States is 8 percent lower than it was when the last recession started in 2007.

#11 According to one recent survey, 62 percent of all Americans are currently living paycheck to paycheck.

#12 At this point, one out of every three adults in the United States has an unpaid debt that is “in collections.“

#13 When Barack Obama first set foot in the Oval Office, 60.6 percent of all working-age Americans had a job. Today, that number is sitting at only 59.2 percent.

#14 While Barack Obama has been in the White House, the average duration of unemployment in the United States has risen from 19.8 weeks to 32.8 weeks.

#17 When Barack Obama was first elected, the U.S. debt to GDP ratio was under 70 percent. Today, it is over 101 percent.

#18 The U.S. national debt is on pace to approximately double during the eight years of the Obama administration. In other words, under Barack Obama, the U.S. government will accumulate about as much debt as it did under all of the other presidents in U.S. history combined.

#19 According to the New York Times, the “typical American household” is now worth 36 percent less than it was worth a decade ago.

#20 The poverty rate in the United States has been at 15 percent or above for 3 consecutive years. This is the first time that has happened since 1965.

#22 While Barack Obama has been in the White House, the number of Americans on food stamps has gone from 32 million to 46 million.

#24 One recent survey discovered that about 22 percent of all Americans have had to turn to a church food pantry for assistance.

#25 An astounding 45 percent of all African-American children in the United States live in areas of “concentrated poverty.”

#26 40.9 percent of all children in the United States that are living with only one parent are living in poverty.

So to learn that a person driving a Mercedes has resorted to theft doesn’t surprise me. Even those who were formerly doing well fell on hard times under Obama. I’m certainly not making excuses for the thief’s actions, just saying, “I get it!”

Obama promised a lot, particularly to the poor. He actually delivered only to the very wealthy, squeezing the middle class…