In a recent interview with ABC News, McCain promoted a number of anti-Trump, Democrat-invented narratives. And the liberal media gobbled it up.

First, the Arizona RINO preposterously declared that Russia’s non-event “meddling” in the 2016 U.S. elections was a greater threat than ISIS.

“[Putin] is the premier and most important threat. More so than ISIS. I think ISIS can do terrible things. And I worry a lot about what is happening with the Muslim faith. But it’s the Russians who are trying, who tried to destroy the very fundamentals of democracy. And that is to change the outcome of an American election.”

I know what you’re thinking. Look at all these RADICAL RUSSIANS running around beheading infidels. 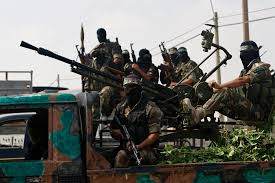 No countries are issuing Russian travel bans. Russians haven’t been displaced by the tens of millions to seek asylum in countries around the world. Most seem to be happy with their rations of toilet paper and vodka at home in Russia.

However, ISIS murders Christians, Jews, and non-Muslims around the globe daily as proof of devotion terror in the name of Muhammad. For those the radical Muslims don’t kill, they torture and rape.

The Russians may hack your elections, but they don’t HACK OFF YOUR HEADS!

And if our elections were hacked by the elections, they likely wanted Hillary Clinton. Obama promised better relations, and based on former CIA Director Brennan said to Congress recently, the Russians preferred Hillary Clinton as president. She would have been easier to manipulate, since the Russian likely have secrets on Clinton.

Who hasn’t hacked America under Obama?

The man’s cybersecurity was as porous as limestone and just as sturdy.

Nevertheless, McCain would have us believe Russian hacking that didn’t actually amount to election tampering is a greater threat to America than the global spread of radical Islamic extremism.

“Now I have seen no evidence they succeeded. But they tried. And they are still trying. They’re still trying to change elections. They just tried to affect the outcome of the French election.”

Hmm. So, the Russians tried, but didn’t succeed. Yet, ISIS succeeds daily. And as we reported, radical Muslim attacks have escalated from geometric to exponential in the last three decades.

The next question focused on Jared Kushner.

Reports allege that Trump’s son-in-law and top White House adviser tried to set up back channels with the Russians during the transition period. 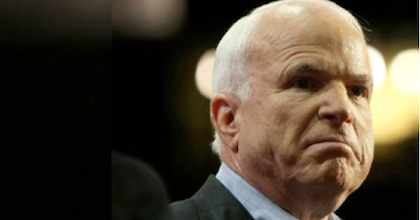 “My view of it is I don’t like it. I just don’t. I know that some administration officials are saying, ‘Well, that’s standard procedure.’ I don’t think it is standard procedure prior to the inauguration of a president of the United States by someone who is not in an appointed position.”

McCain has no proof this happened, yet he jumps to the conclusion that it happened. And if it did, McCain doesn’t even take the hint that such communication could be considered “business as usual”.

He question Kushner’s use of delegated authority from the president-elect.

Democrat-in-Training (DIT) McCain went on to agree with fellow Dems that FBI Director Comey was a stooge for Trump last summer.

In outing just a smidgeon of Hillary’s decades-long corruption during the presidential campaign, McCain claims that Comey threw the election for Trump.

“And I think that Mr. Comey, we now know, took action that he did in regards to then-candidate Clinton because of some false news that was being put out by the Russians. I mean, this becomes more and more and more bizarre. In fact, you can’t make it up.”

How this man sleeps at night pretending to be a Republican is insane. McCain represents the perfect example of a man who has stayed at a job well past his prime.

Frankly, I’m sure America has tired of McCain pretending to represent Conservative values, hiding behind the Republican Party, when he is undoubtedly a Democrat.