On more than one occasion Rice put her foot firmly in her mouth, most notably on Benghazi. This stooge actually took Hillary’s bait and blamed a CA videographer!

The entire Obama administration from the top down propagated this lie, and they all should have been impeached or drug-tested.

So, knowing this history is anybody surprised that Susan Rice doesn’t want to face the scrutiny of the Senate?

Rice declined a request from Senator Lindsey Graham to participate in a judiciary subcommittee hearing regarding potential Russian interference.

In a letter obtained by CNN, Susan Rice’s lawyer outlines Rice’s reasoning for not appearing. The letter was addressed to Sen. Graham and Sen. Whitehouse and reads:

A source familiar with Rice’s discussions told CNN that when Graham invited her, Rice believed it was a bipartisan overture and was prepared to accept. However, Whitehouse indicated to her that the invitation was made without his agreement, as he believed her presence was not relevant to the topic of the hearing, according to the source.

Rice considered the invitation a “diversionary play” to distract attention from the investigation into Russian election interference, including contacts between Trump allies and Russians during the campaign, the source said.

Graham first told CNN before the letter was sent that he had invited Rice before the Senate panel to determine whether the Obama administration “tried to politicize intelligence” — part of his broader investigation into Russian meddling in the 2016 US elections.

Despite declining the appearance, Rice’s lawyer assured Graham and Whitehouse in the letter that she was “prepared to assist Congressional inquiries into Russian election interference because of the important national interests at stake, provided they are conducted in a bipartisan manner, and, as appropriate, in classified session.”

The current concern is that Rice acted “improperly” as national security adviser by gathering the identities of Trump administration/transition officials. Rice is now infamous for the unmasking scandal.

The Democrats claim to want to get to the truth about the Russians, right? 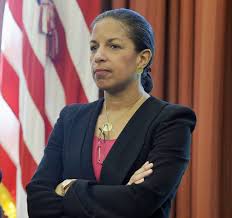 Sure and pedophiles make good babysitters.

Thus, you can bet there will be no clamor from the Left demanding that Rice testifies.

This is because they Democrats know the real truth. They know that Obama spied on then candidate Trump. Further, Rice authorized the spying and thus her testimony would land her in prison.

Worse yet, her testimony could hurt her former boss. And we know that the Left will protect Obama if he were on video beheading Jews.