The Race to be the WORLD’S FIRST TRILLIONAIRE

Despite the fake news narrative of the media, the world’s richest people are mostly leftists.

Most of them are as twisted mentally as they are wealthy. Crazy wealth, mostly unearned has a way of doing that to a person.

I’m not saying people like Bill Gates didn’t come up with good concepts. They did. However, they have benefitted greatly thereafter from doing essentially nothing. At some point wealth shifts from making it to retaining it…by any means necessary.

Nevertheless, as the saying goes, “The rich get richer,” and as CNBC reports,

The world may soon see its first trillionaire in Microsoft co-founder Bill Gates — as long as Amazon’s Jeff Bezos doesn’t get there first.

Currently worth $87 billion, Gates is the richest person in the world. His net worth only continues to rise, despite his efforts to donate the majority of it to charitable causes via his foundation and The Giving Pledge.

However, Bezos is hot on his heels. The mogul’s wealth eclipsed $80 billion for the first time on Thursday, Bloomberg reports, putting him temporarily within $5 billion overthrowing Gates as the world’s richest person.

If there were ever a reason to stop the growth of anti-Trump Amazon, it’s Jeff Bezos.

He has managed to acquire wealth faster than anybody, notable exception Mark Zuckerberg when Facebook launched.

And like Zuckerberg, Bezos gains more and more data on Americans, and he is no friend of conservative America.

Bezos’ wealth has grown by $65.2 billion in the last five years, and he currently oscillates between second and third-richest in the world, trading places with the likes of Inditex founder Amancio Ortega and legendary investor Warren Buffett.

And if there ever were a real-life Lex Luther, it’s Jeff Bezos.

The more wealth he amasses, the more dangerous he becomes. And he may achieve this crazy milestone sooner than expected. 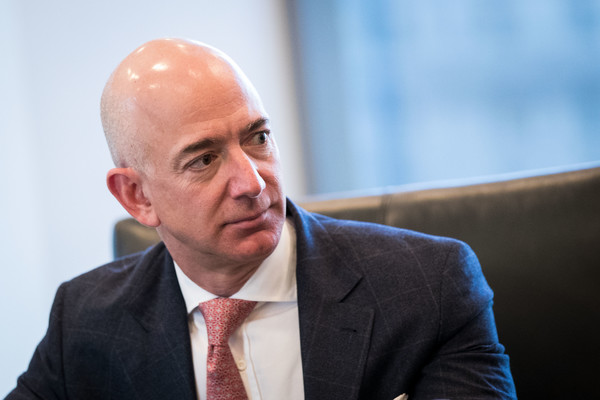 As these fortunes continue to expand, the world inches closer to producing its first trillionaire. According to a recent report from Oxfam, an international network of organizations working to alleviate poverty, given the exponential growth of existing wealth, the world could have its first trillionaire in the next 25 years. Gates would be 86 then; Bezos, 78.

Right now, Gates stands as the most likely candidate to reach that milestone. For its analysis, Oxfam researchers applied the average growth rate of the ultra-rich — 11 percent per year since 2009 — to Gates’ current levels of wealth, which was about $84 billion at the time of the study. If his investments keep doing as well as they have, the 61-year-old billionaire could indeed become the world’s first trillionaire.

But if Bezos’ wealth continues to rise at the same clip, he could very well reach trillionaire status first.

That kind of money and hatred for America’s president is dangerous. Bezos has dedicated the fake news media outlet, the Washington Post, to hammering President Trump no matter what.

Bezos seems to believe the wealth is all that matters, as he actually challenges then-challenger Trump:

“An appropriate thing for a presidential candidate to do is say, ‘I am running for the highest office in the world. Please scrutinize me,” Bezos said Thursday at the Vanity Fair New Establishment Summit in San Francisco. “That’s not what we’ve seen. To try and chill the media and threaten retribution and retaliation, which is what he’s done in a number of cases, it just isn’t appropriate.”

“We have freedom of speech in this country, it’s written into the Constitution. There are a bunch of nations that have written constitutions that they don’t pay any attention to,” he continued. “It is inappropriate for a presidential candidate to erode that around the edges. They should be trying to burnish it instead of eroding it.”

Bezos did his best to influence the 2016 presidential election, and that was when he was a mega-billionaire.

What will this man do should he become a trillionaire? Notice how no leftists seem to find Bezos’ wealth over the top.