Will Keith Olbermann Be Arrested for his latest rant? Some say YES!

Keith Olbermann fuels himself on ignorance. He so desires to be relevant.

After his unceremonious dismissal from MSNBC, Olbermann has bounced around looking for somebody to “love him long time”. No takers, so he’s now bottom-feeding.

In a 7-minute rant posted on GQ Magazine’s Twitter feed–yes, this Olbermann now creates his OWN videos–the Leftist lunatic made his boldest statement to date. Olbermann actually appealed to foreign governments and spy agencies around the world. Further, he asked them to assist in overthrowing President Trump and the government of the United States.

Olbermann began his statement by reading:

“I appeal to the intelligence agencies and the governments of what is left of the free world.

To them as entities, entireties as bureaucracies making official decisions, and to the individuals who make decisions of conscience. To GCHQ and MI6 in the UK, to the BND in Germany, the DGSE in France, the ASIS in Australia, and even of the GRU in Russia, where they must already be profoundly aware that they have not merely helped put an amoral cynic in power here, but an uncontrollable one, whose madness is genuine and whose usefulness—even to them—is at an end.

…and to the world’s journalists, I make this plea: We the citizens of the United States of America are the victims of a coup. We need your leaks, your information, your intelligence, your recordings, your videos, your conscience. The civilian government and the military of the United States are no longer in the hands of the people, nor in the control of any responsible individuals on whom you can rely….”

To the intel agencies of the world: We need your help. pic.twitter.com/w8oVz1JcSi

For the last few days Olbermann, like most of the left-wing rabble, have been obsessing over the firing of FBI Director Comey.

Earlier in the week, Olbermann ranted about the firing:

“Donald Trump has declared war on the legal system, moved to overrule the spirit of the Constitution, and enacted a coup against the ideals of the United States of America.

At this hour, one of two things is already and irretrievably underway: either the end of Trump, or the end of American democracy, because both cannot continue, because simply — you cannot fire the man who is investigating you.

You cannot fire the man who is investigating you.  Even the dumb people will understand what you are trying to get away with.

To do so is to immediately and irreversibly take whatever problems you face, whatever investigations you have to suffer, whatever crimes you may or may not have already committed, and to magnify and multiply them by a number so large it almost cannot be counted.

It is, by itself, a coverup, the man who is investigating you.

Donald Trump should be impeached as president today.”

Congratulations @realDonaldTrump. You have just impeached yourself. #Flee https://t.co/QTg97Tfsea

Ever the hypocrite, this is was not the position he had been exclaiming just a few months ago: 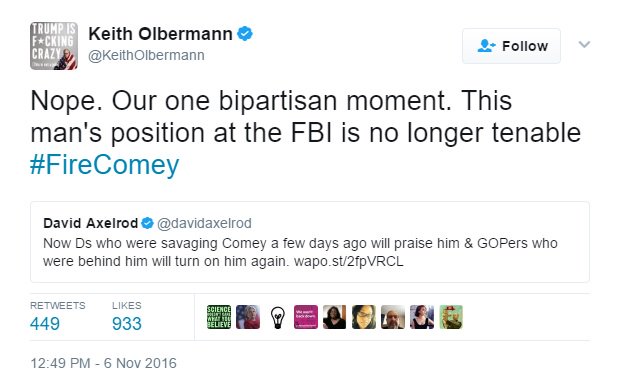 Could Olbermann once again be opening his new employers to a fresh series of legal and political controversies that have peppered his career?

Past experiences have shown Olbermann to be someone that is unlikeable and difficult to work with.  John Gibson once shared a story about working with Olbermann:

Gibson was vindicated with the release of White House Records showing that Keith Olberman apologized to Bill Clinton over MSNBC’s coverage of his affair with Monica Lewinsky. Gibson told listeners about “bathtub boy’s” refusal to show up to work at MSNBC because of the network coverage on the affair.

It appears the head injury he suffered on the New York subway years ago did more than upset his equilibrium and might’ve cause brain damage?  If things don’t work out for Keith with GQ’s weblog, Fox News might have a job waiting for him.