As you watch this woman, note that she’s looking for trouble.

She even says it. I’ll get to that in a minute.

What triggered this Leftist meltdown? A dreadful Confederate flag.

Talk about representing Portland well, this woman should be the new poster child.

Heather Franklin noticed that the store had several rugs patterned after the Confederate flag, so she decided to speak up.

As Heather explained, she made a special trip to the store in order to document this atrocity. According to Heather, she shops at the store regularly, but now things have changed.

Heather was offended that the store would have this “racist” flag. And the disregard for such, particularly by the Latino man who worked there (maybe owned) the store upset her.

As the Latino man tried to explain, it was black employees who hung the flags.

But Heather was having none of it. She was there to defend black people, and nobody would stop her. After all, how would black people defend themselves.

God forbid a black person walk in that establishment, and well…SEE THOSE FLAGS!

So Heather became Wonder Heather, Defender of Blacks in Portland.

And why not make a scene?

No sense voicing ones idiotic concern to a manager or by writing a letter. OR how about just shopping elsewhere? 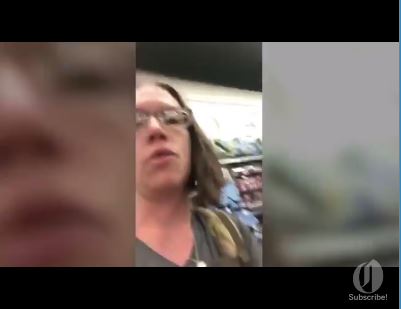 Great questions for those of us with LIVES!

Remember, Leftists are miserable, thus everybody around them must be miserable as well. If there are any black people in that area of Portland, Heather wants to find them, to share her misery. Why should black people bother with living life, when there is a battle to fight against the Confederate flag.

As Heather said, “It’s symbol of slavery…it’s like having a swastika on your wall.” Because we all know how much the Left cares about the Jews!

The Latino man even tried to educate Heather, suggesting she learn the true history of the flag. Psst. As if Heather wanted FACTS! Silly Latino!

Another man chimed in, in defense of the store. In no uncertain terms he let Heather know how he felt about her, and told her to get out and shop elsewhere. He questioned Heather on her politics.

“You voted for Hillary or Bernie. Which one did you vote for that lost?”