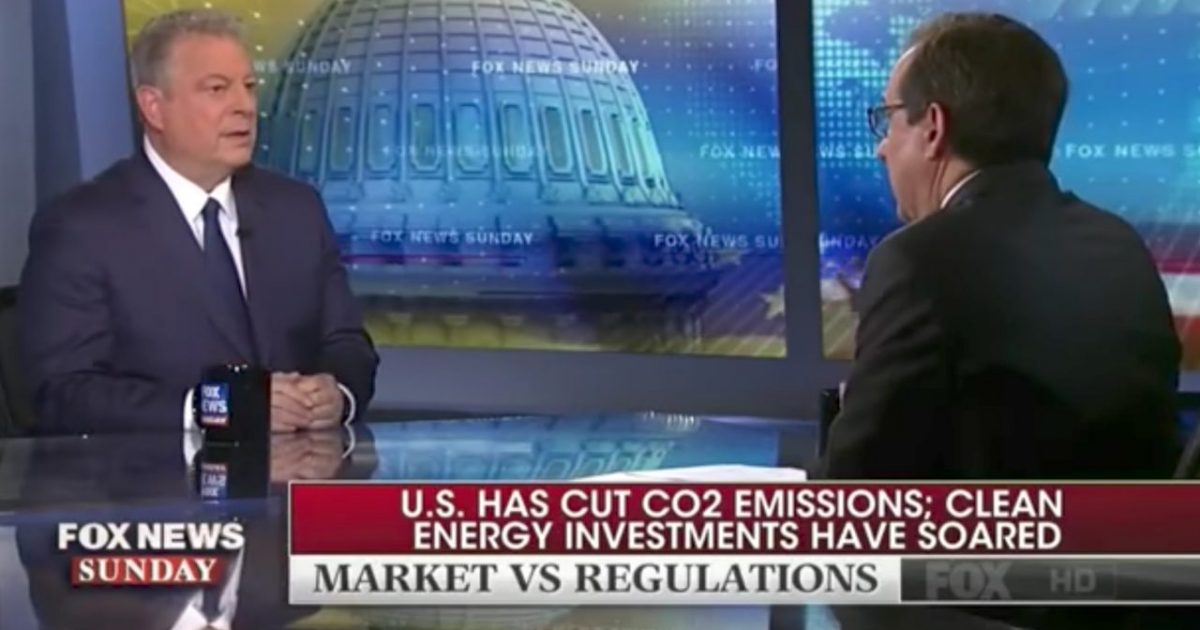 Wallace pointed out that many claims made in “An Inconvenient Truth” failed to materialize.

Recently Gore sat down with FOX News’ Chris Wallace to discuss climate change in a nearly ten minute interview. Gore expressed disappointment over the US exit from the Paris Accord, implying that the world was headed for disaster.

Wallace reminded Gore about the claims in his 2006 documentary.

Remember when Gore warned us that if the world didn’t take drastic measures, we’d reach the point of no return within a decade?

In fact, I think Gore touted man-made global warming as a “true planetary emergency” in his publicity pieces for the movie. Eleven years later, Gore’s claims about global warming are as valid as his claim to have invented the Internet.

We’ve heard this story before.

As National Review discussed, the predictions of doom and gloom have persisted for decades:

Gore’s prediction fits right in with the rest of his comrades in the wild-eyed environmentalist movement. There’s a veritable online cottage industry cataloguing hysterical, failed predictions of environmentalist catastrophe. Over at the American Enterprise Institute, Mark Perry keeps his list of “18 spectacularly wrong apocalyptic predictions” made around the original Earth Day in 1970. Robert Tracinski at The Federalist has a nice list of “Seven big failed environmentalist predictions.” The Daily Caller’s “25 years of predicting the global warming ‘tipping point’” makes for amusing reading, including one declaration that we had mere “hours to act” to “avert a slow-motion tsunami.”

Many predictions made by Gore and other scientists flopped. And as early as the 1970s, climate change should have been seen for what it was: a political scam.

The 1975 Newsweek article entitled “The Cooling World,” claimed Earth’s temperature had been plunging for decades because of human activity. That article actually suggested we try to melt the Arctic Ice Cap with black soot. In fact, Obama’s ‘science czar’ John Holdren was one of the top global cooling believers. Ironically, he predicted that over-population and starvation would lead to a new Ice Age.

By Holdren’s predictions, millions of people were going to die by 2020 in carbon-dioxide induced famines of this new Ice Age.

People forgot about the global cooling of the ’70s and the Ice Age that never happened.

But that’s not the only climate theory that is a total bust.

As The Blaze pointed out:

In 2007 Gore predicted that the summer Arctic ice in the North Pole would completely disappear by 2013 due to global warming caused by carbon dioxide emissions.

Of course it didn’t happen either. But Gore refuses to admit the error of his thinking. In fact, he continues to defend his predictions.

He also claimed Mt. Kilimanjaro in Africa would lose it’s snow-pack by 2016. But that also hasn’t happened. In fact, it’s not even close.

When Wallace penned him down and said “aren’t you wrong?” Gore offered his Laotian-labor manufactured standard answer:

“No,” Gore replied. “Well we have seen a decline in emissions on a global basis. For the first time they’ve stabilized and started to decline. So some of the responses for the last 10 years have helped, but unfortunately and regrettably a lot of serious damage has been done.”

“Greenland, for example, has been losing one cubic kilometer of ice every single day. I went down to Miami and saw fish from the ocean swimming in the streets on a sunny day. The same thing was true in Honolulu just two days ago, just from high tides because of the sea level rise now,” he added.

Climate change is a money maker.

Obama and his minions hid more than $77 billion in climate change funds.

In 2013, the Congressional Research Service concluded 18 agencies had climate-related activities. Trump’s biggest challenges will be finding those hidden funds and putting them to better use. Meanwhile, watching Al Gore as every single claim he ever made is dismantled piece by piece will be quite entertaining.