The Washington investigations will eventually destroy the Democrats and half of D.C.

After 8 years under the dark cloud of Obama, it’s hard to predict how many guilty parties will emerge.

Holder obviously is lying awake with the investigation on his mind. Recently, the Senate Judiciary Committee announced they will open a probe into Former Attorney General Loretta Lynch’s efforts to influence the FBI investigation of Hillary Clinton during the 2016 Presidential election. Perhaps Holder’s tweet is a sort of warning aimed at Lynch. Actually, there are plenty of people he could be referring to. 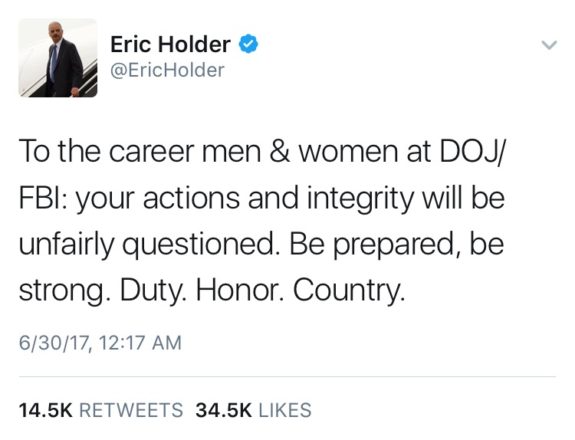 As the Gateway Pundit reports:

Fired FBI Director, James Comey is under scrutiny for admitting he gave the contents of his memos to a friend who then leaked to the press. Comey also threw Loretta Lynch under the bus when he admitted in a testimony that she directed him to refer to Hillary Clinton’s email investigation as a ‘matter’ in order to downplay the seriousness of the probe.

Acting FBI Director, Andrew McCabe is also under Federal investigation for THREE different inquiries. As previously reported, Andrew McCabe is being investigated by the Office of U.S. Counsel violating the Hatch Act according to a new report by Circa News.

Or could he be warning former NatSec Advisor, Susan Rice who has received backlash for her unmasking scandal? Rice has also just agreed to testify before a House Intel Panel in a closed-door session.

Many people find the tweet both cryptic and bizarre.

Holder is not a stranger to social media, but he’s not a rapid tweeter, like the president. And he’s definitely not one to tweet after midnight. Therefore, speculation was running rampant.

However, Representative Steve Smith was happy to weigh in with a few clarifications.

Just add that to the long list of scandals.

As Attorney General, Holder was a disgrace. He was the first AG held in contempt by the House of Representatives. Perhaps his worst move was Operation Fast & Furious.

This gun running scandal caused the death of an American border agent and many Mexican citizens. It was a reckless law enforcement operation riddled with unnecessary danger.

Next, Holder re-instituted the Clinton-era model of handling terrorism. His actions made America and the world a less safe place.

Holder was also famous for engaging in “sue and settle” lawsuits with allies of the president. This was a way to create regulations without informing the public. It’s the kind of trickery the Obama Administration is famous for. Holder only did one good thing as Attorney General. He quit.

In fact, Holder was such a bad AG, he actually told Bill Maher he feels partly responsible for Trump’s win. That was one of the only truthful things Holder has said in his miserable life.

Being Black Won’t Save His Ass

Like Obama, Holder was the first black to serve in his position. And like Obama, he was one of the worst to ever hold the position.

Further like Obama, Holder committed crime after crime against the American people. With the two highest law enforcement officers in the land being black, these two provided cover for each other.

Those days are over for both of them. There may come a point where blacks in America may demand justice in the form of prison terms for each of these frauds.

Something tells me that Holder may have many sleepless nights. And his tweet forebodes what he knows is coming.