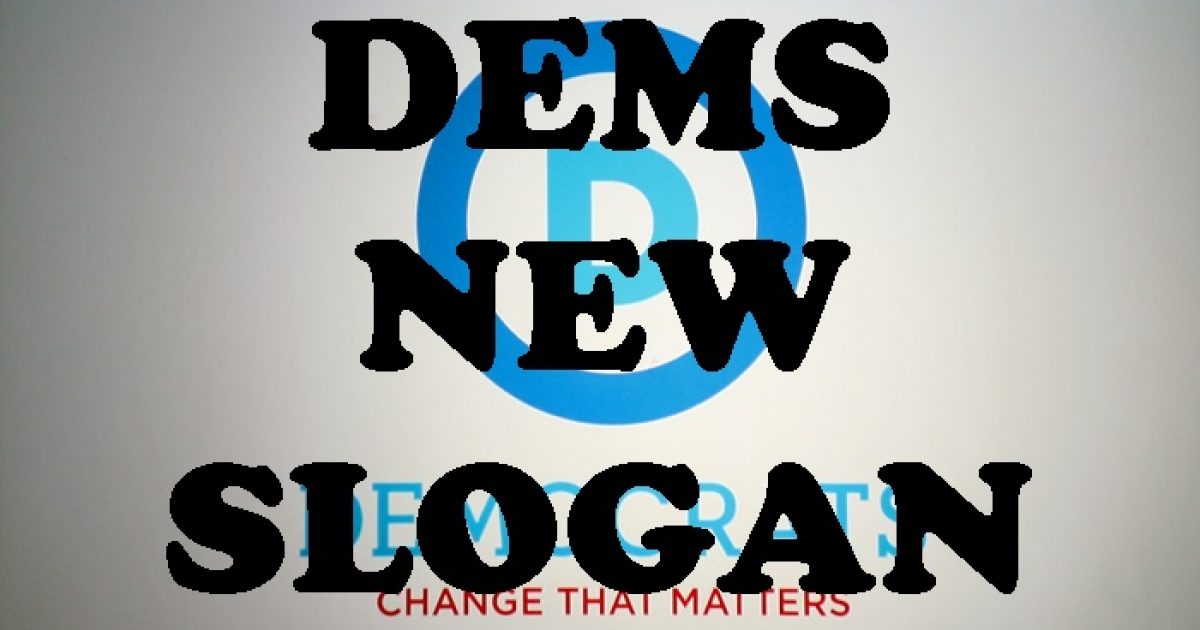 FOR A GOOD LAUGH: Heard the Democrats’ New Slogan?

The Democrats love their slogans.

“Yes we can!” comes up with more nonsense than anybody else. Here is the list of 2016 campaign slogans tried by Hillary Clinton:

Shocking that none of those stuck. {smh}

How about this: “Hillary Forward for America Together Fighting For Us I’m With Her Stronger Together So When they go low we go High!”

I suspect Democrats remained drunk on Obama’s slogan, and thus rejected Hillary’s attempt to change the “change we can believe in.” Now, the Democrats find themselves in a quandary.

TBS documented the Democrats’ search for their elusive message.

We watched Hillary Clinton flounder around, searching for that elusive “what do I stand for” thing. In fact, there were like 84 core messages before her camp settled on the uber-lame “Stronger Together.”

That message failed miserably, as black people didn’t get the memo. But hey, no worries. The Dems’ new core message is being worked on.

That message is being worked on. We’re doing everything we can to simplify it, but at the same time provide the meat behind it as well. So that’s coming together now.

And as the AP noted,

The admission from the No. 4 House Democrat — that his party lacks a clear, core message even amid Republican disarray — highlights the Democrats’ dilemma eight months after President Donald Trump and the GOP dominated last fall’s elections, in part, because Democrats lacked a consistent message.

Funny the Democrats just now recognize they don’t have a core message.

We were told the Democrats would have found their message by Fall. However it seems some hero found the message under a couch cushion.

As reported by GQ,

In the midst of a reeling Republican presidential administration that may or may not be imploding in spectacular fashion even as you read this sentence, the Democrats have rolled out their slogan for the 2018 midterm congressional elections. My friends, the fight for the soul of this country is in the hands of people who came up with… this:

Nice.  Newer and more improved? Or what about “The last was good, but this is better!”

Try this one: better than better?

Congratulations to those of you who reflexively whispered “…Papa John’s” before burying your head in your arms and sobbing quietly.

For God’s sake, it’s been only two weeks since the Democratic Congressional Campaign Committee invited the Internet to vote on which inane resistance-themed Pinterest meme it should turn into a 2018 bumper sticker, and 13 days, 23 hours, and 59 minutes since the Internet responded by mercilessly roasting them for it. But instead of promptly firing every Don Draper knockoff involved in the creation of these abominations, the people charged with wresting control of the country from a senile bigot less than 18 months from today are indeed poised to roll out what sounds like a marketing tagline for Corinthian Colleges.

I love this. The Left admits it has no message, and poll tested their message.

Given that “Make America Great Again” has become the preferred salutation at NRA events and has probably made the world’s producers of generic red baseball caps into gazillionaires, I understand why Democrats feel the urge to craft some sort of hashtaggable one-liner to lead the charge. But obsessively tinkering with the slogan continues to ignore the problem, which is, as my colleague Drew Magary recently put it, that the Democrats still don’t have a unified message other than some tepid variation of “Actually, we are the party of the white working class,” “This is not normal,” or “Hey, did we mention that we’re not Donald Trump?” The Republican Party backs up its stupid slogans with substantive promises, and while I’ll eat my shoe on Facebook Live if Mexico ever actually pays for the wall, simply taking a stand for something was enough to win control of the entire federal government. Meanwhile, the Democrats keep brainstorming vapid catchphrases and hoping that the next iteration will be more #viral than the last.

Prepare to eat your shoe, Lefty.

Trump is more than mere words. Trump’s slogan is how he feels. And that’s why the leftists can’t seem to find their message.

Now they give us “better skills, and better jobs, and better wages?” I see your raise, and I raise you back: Make America Great Again.

Even the moron who wrote the GQ article recognizes that the Democrats offer just more empty words.

Voters want better skills, and better jobs, and better wages. (And better health care, and a stronger social safety net, and a fairer tax system, and so on and so forth.) But the party desperately needs to decide which policies it plans to support in order effectuate these outcomes, even if some of the more tantalizing possibilities—single-payer health care or a federal minimum wage hike or whatever—are more aspirational at this particular moment in history than anything else. It’s cool that the Democrats are not Donald Trump. Being something other than Donald Trump is great! Now, they need to figure out who they are instead.

The author told the Democrats who they are, and it’s not good.