Now, the agency blacked-out material used by the DOJ to respond to press inquiries about the infamous rendezvous. 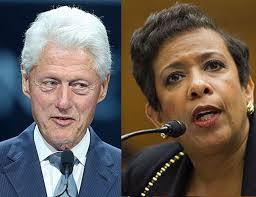 Months ago, we reported that FBI agents turned on Bill, and gave away his secrets. Now we know he brokered a deal with Loretta Lynch at that meeting on the tarmac. Not surprisingly, Clinton wanted his wife to get away with her latest act of treason. Thus, he plotted with Lynch to make that happen. And, the cover-up continues.

As Judicial Watch received 417 pages of documents in response to its FOIA lawsuit (Judicial Watch v. U.S. Department of Justice (No. 1:17-cv-00421) seeking:

Although documents were heavily redacted, Judicial Watch uncovered an obvious conspiracy between the Clintons and Lynch.

One email exchange shows that Former Assistant Attorney General Peter Kadzik was brought in to assist with public relations issues on June 28, 2016, the day after the tarmac meeting. (Kadzik is a longtime friend of John Podesta and a Hillary Clinton donor, who was criticized as being conflicted when he was assigned as the Justice Department attorney to oversee the probe of Hillary Clinton’s and her aide Huma Abedin’s emails found on Anthony Wiener’s computer.)

Director of the Justice Department Public Affairs Office Melanie Newman sent an email to Richard P. Quinn, former National Security Assistant Special Agent, and Michael P. Kortan, who is currently the assistant director for Public Affairs for the FBI, advising them she wanted to “flag a story” about “a casual, unscheduled meeting between former president Bill Clinton and the AG.” And she provides the AG’s talking points.

So the meeting was not impromptu, but planned. And they weren’t discussing their grandchildren.

Will Trump get to the bottom of it?

Who knows. The president remains embroiled in fake news scandals. Mueller seems determined to ignore the obvious malfeasance of the Clintons and their supporters. Apparently, he hopes to satisfy the blood-lust the Left has for Trump.

However, it’s Mueller who may find himself under fire. As TBS wrote earlier of Mueller,

The public now clearly sees through the nonsense, and they now want Trump to be left to do his job. Perhaps more importantly, they want government to eradicate the true swamp creatures.

Special Counsel Robert Mueller has a problem: He has a disqualifying conflict of interest regarding a large part of his work. It involves a choice between investigating or relying on former FBI director James Comey, a longtime close friend of Mueller’s.

Ideally, he’ll recognize that and resign. But if he doesn’t resign, Attorney General Jeff Sessions should appoint another special counsel to take over the obstruction-of-justice part of the investigation, where Mueller is disqualified.

At present, there are two investigations: One into whether the Trump campaign colluded with the Russians (a claim that even Democrat Chris Matthews admitted fell apart after Comey’s recent testimony) and an investigation into whether, while being investigated for this claimed collusion, President Trump or someone else obstructed justice. That investigation is closely tied to Comey, and so is Mueller.

So soon, Comey will be under fire. Thus, he will need to go into deep hiding, unless he wants to end up dead.

The more America learns of the Democrats, the more we know they are scandalous creatures.

Reports continue to surface of pay-to-play and payola, thus the Democrats get more and more fearful of President Trump exposing their crimes.

But this won’t stop the Democrats from digging a deeper hole.

In fact, Mueller expanded his net into Trump dealings with Russia. Further, there persists a rumor that Mueller will impanel a grand jury.

But fear not, America. The Left no longer have the people on their side. Thus, their ability to create false narratives lessens each day. And when this worm turns, the sucking sound you hear out of DC will be President Trump pulling the plug to the swamp in DC.