I don’t know the details of this last eclipse. I heard it was the closest the moon will get to the earth in some time.

Thus, supposedly few of us who saw this eclipse will likely live long enough to see another like it again.

People made videos of the eclipse as well as amazing photographs, documenting the event for posterity. If you happened to be where the eclipse had 100 percent totality, then you certainly witnessed a miracle of sorts. This is why the latest eclipse reminds me of the politics of the last decade.

Consider the totality of the eclipse of Obama in 2008.

Never had America seen such an outpouring of support. Despite being completely and utterly unqualified to be president, Obama eclipsed all expectations and won. He even overshadowed the Clinton machine, forcing Hillary Clinton to wait her turn.

The problem Obama encountered occurred when he needed to actually work, legislate.

America got a punch in the gut. We witnessed what happens when the sun gets too close to the Earth, and people got scorched.

Obama decimated the Democratic Party, as they lost over 1000 seats on his watch. Obama gave the Congress and Senate to the Republicans, then ultimately contributed to the biggest loss for Democrats in presidential history. And don’t even get me started on Obama’s impact to black people, as the burnt toast jokes would fly like eagles.

Obama remained confident about his record. Thus, on a late night talk show that Donald Trump would never be president. For those like me who thought Obama couldn’t be exposed further as a moron, we stand corrected. Obama looked utterly ridiculous on election night, and I never saw the man.

Back to the irony of the eclipse.

A second once in a lifetime eclipse occurred on election night. And Trump gleefully trolled Obama in a graphic that showed Trump eclipsing Obama. 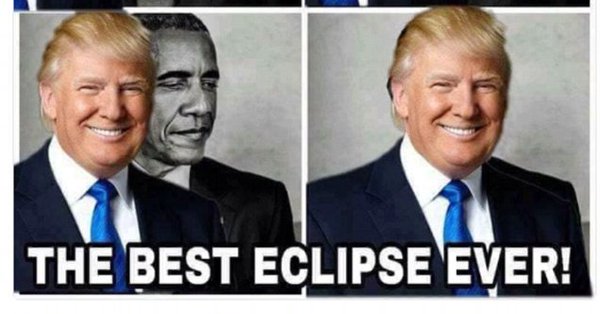 I saw this graphic and almost spit coffee through my nose, I laughed so hard.

Newsweek and others have covered the story of an ‘eclipse’ picture originally tweeted by Jerry Travone.

“President Donald Trump may have glanced up at the sun Tuesday without the recommended glasses, but he could apparently see well enough Thursday morning to post a meme about the solar eclipse. In the latest of his near-daily Twitter rants, Trump retweeted an image showing a colorized portrait of him moving in front of a black-and-white picture of Barack Obama. The caption read, “THE BEST ECLIPSE EVER!”

Trump retweeted it. Thus soon after, the meme garnered more than 800 retweets and 7,300 likes. But the Left didn’t disappoint, as they claimed that Obama remains “the sun”, given the significance of this particular eclipse.

As with all things that minimize Barack “Baby Black Jesus” Obama, next the Left cried racism.

“Haaretz called the image a “race-baiting photo” and noted it was shared by a user named Jerry Travone, whose profile says he’s a YouTube actor, political junkie and proud Trump supporter who likes to “push back against liberalism.” Others noted that, even if Trump was correct in saying he was overtaking Obama as an attention-getter, the total solar eclipse he referenced lasted for only about three minutes.”

How dare somebody have fun at the expense of Obama!? Moreover, how dare someone attempt to say that Trump eclipses Obama?

If the angry protesters and baseball shootings don’t explain, Leftists don’t like losing, and they can’t take a joke.

As for the solar eclipse? Though the next one won’t be like this one, it will be visible in the United States comes in 2024. Ironically, this one will occur in Trump’s final year of his 8-year presidency.

At that point, nobody will even remember the sun.