White Leftists know how to cash in on white-bashing.

The previous administration put a target on the back of many groups, particularly white people. A few profiteers learned quickly how to cash in.

Leftist filmmaker Michael Moore came under fire on Saturday after he decried white people on social media. The moron actually cheered for the “last days of white rule.”

“Trump’s America: The last days of White rule. It’s always a b**ch to have to give up power you’ve held for 300 years,” Moore wrote.

Actual white supremacists notwithstanding, we now live in a time when white people merely standing up for their rights is considered white supremacy.

Nevertheless, in Charlottesville, Virginia. Clashes between these supposed white supremacists and counter-protesters led to dozens of injuries and at least one death, as a man drove his Dodge Challenger into a crowd of counter-protesters. The motivation for the driver may not be as clear cut as the media portrays.

Moore’s tweet came with a link to a news story about that crash, which Sen. Ted Cruz (R-Texas) has labeled “domestic terrorism.”

According to The Blaze,

The violence began on Saturday after white supremacists held a rally in Charlottesville. They were protesting the planned removal of a statue of Confederate Gen. Robert E. Lee. Ever since a shooting at a church in Charleston in 2015 that was fueled by extreme racism, there has been a push to remove figures from a society that glorify the racist past of the American South.

TBS in no way condones any racists, which is why we fight Leftists in all their forms. But the idea by the Left of removing statues was meant to provoke a reaction. White-washing history (pardon the pun) magically makes the world more palatable to all?

Moore and other Leftists speak often of “white rule”. I challenge Moore to live where there is black or brown rule. Anybody think this hypocrite would live in any country in Africa or South America? The only place a hack like him can survive is in a white Leftist country.

Social media responded, including people who Moore likely believes is his target fan base. 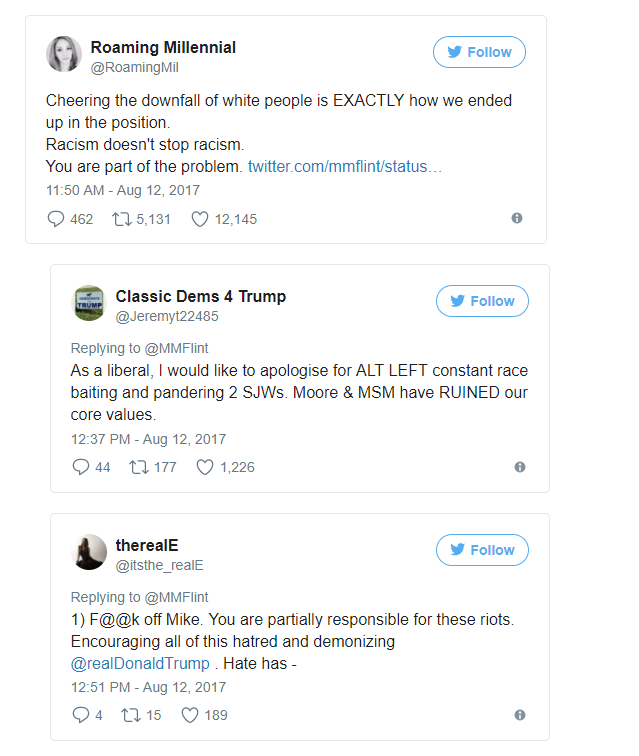 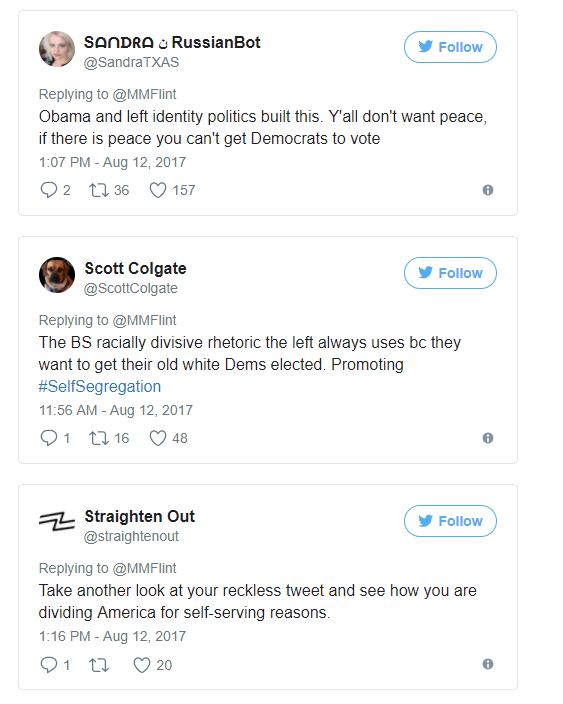 Truth be told, Moore knows that Trump is the right man to lead America.

Further, Moore doesn’t believe his rhetoric. He just likes selling him movie tickets and staying in the spotlight.

Moore often misses the mark. TBS wrote of Moore getting punked by a Chrysler worker.

Michael Moore race pimps with the best of them. This man has earned a lot of money on the misery of others. His fake narratives have made him an icon of the Left.

In the clip below, Moore gets it so wrong. He’s practically speechless, when a person suffering from Liberal policies speaks from reality, and not from a fake Hollywood narrative.

The video has been removed, but the exchange below is what occurred.

The exchange between this man and Moore interests me on so many levels. Mostly what intrigues me is how smug Michael Moore appears as he faces a man with real-life issues.

Man: I think he’s done more for me than any Democrat has in my lifetime.

Moore (interrupting): He hasn’t done anything for you yet.

How can Moore say that? We were told that the election of Obama was trans-formative. However, the election of Trump did nothing for anybody. Is this man not entitled to feel “hope and change?”

Man: He raised the issue.

Moore: He raise…(interrupting) He raised

Man: He raised the issue, and that’s more than any of them have ever done.

Recently, Moore actually made sense, as he is mad at Democrats.

Liberal activist Michael Moore lashed out at national Democrats on Wednesday after the party fell short in a special House runoff election in Georgia despite spending tens of millions of dollars on a race that was viewed as a referendum on President Trump.Moore and others on the left are furious with what they view as a rudderless Democratic Party that has failed to develop a new strategy or message in the wake of Hillary Clinton’s surprising election loss in November.Moore ripped the Democratic National Committee and its House campaign arm for having “no message, no plan, no leaders.” Democratic leaders “hate the resistance,” Moore said, underscoring the lingering tension between the party’s grassroots base and the establishment in Washington.

So it’s not like the Left didn’t know the playbook. But do they change? Absolutely not.

The article in The Hill continues,

Liberals are grappling with Tuesday night’s dispiriting loss, in which Democrat John Ossoff fell to Republican Karen Handel in Georgia’s 6th District contest to replace former Rep. Tom Price (R-Ga.), who is now Health and Human Services secretary.The district is reliably red, but Democrats, eager to make a statement about the strength of their grassroots fury, went all-in to turn the district blue, casting the election as a referendum on Trump and pouring millions of dollars into the race.Liberals have turned out for huge anti-Trump protests across the country and have made life miserable for GOP lawmakers at town halls in their home districts, but Republicans nonetheless won all four special elections this year.

In other words, the Democrats have now tried their message to unseat Republicans.

Moore would serve himself and other Leftists well by making up his mind about how he views things. I’d suggest he begin with the truth.