First, she admitted she wants Trump dead. Now, she sent a Holocaust-themed tweet to Missouri’s governor.

As we previously reported, last week Chappelle-Nadal attacked Trump with assassination comments. In fact, the Secret Service is currently investigating the loud-mouthed trouble-maker. But despite being watched carefully, Chappelle-Nadal still can’t sensor her comments.

In fact, the Senator is well-known for her ranting and raving.

This isn’t the first time the Senator’s use of harsh language landed her in hot water. Back in 2014, she tweeted “F^ck You” to Governor Jay Nixon. Apparently the Senator was tear-gassed in a crowd of protesters after the death of Michael Brown in Ferguson.

She also made a lot of “white privilege” remarks during that same period.

State Sen. Maria Chappelle-Nadal apparently said on Twitter: “LET ME BE CLEAR. When you exercise your #WhitePrivilege, don’t think I’m not going to remember. I will use it for the future. Uncomfortable?”

Earlier this year, Represenative Joshua Peters, another Missouri Democrat, accused Chappelle-Nadal of inappropriate behavior. Apparently, she lied about Peters, accusing him of hugging her and calling her “Boo”.

The liberal lawmaker went after Republican Governor Eric Greitens with her latest attack. And to think, people accuse Trump of being offensive. This nut-job created quite the stir on Twitter. After seeing her post, it’s easy to understand why people are outraged by her latest comments.

Chappelle-Nadal, the state lawmaker who recently wrote she hoped President Donald Trump would be assassinated, shared a tweet that said, “Greitens should know where the Trump Train goes. At the end of the line is this place!” The tweet included a picture showing the gates of a Nazi concentration camp. 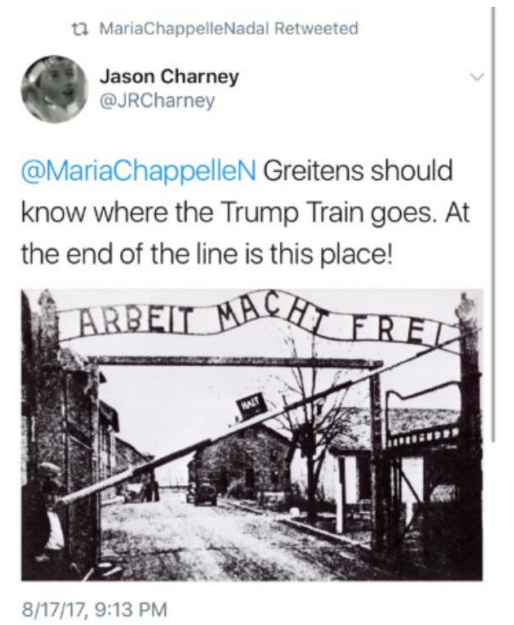 The picture of the gate of the camp includes the sign with the words, “Arbeit Macht Frei,” translated to “Work Sets You Free,” a slogan often found at the entrance of Auschwitz and other concentration camps. The train comment is in reference to the fact that many prisoners were transported to Nazi camps in that way.

Sen. Claire McCaskill, also a Democrat, was quick to call for Chapelle-Nadal’s resignation after the assassination comment — and now the Missouri legislator has produced this little anti-Semitic number.

This woman has no place in public service. She goes off on rants that make Maxine Waters look civilized. Furthermore, her party is turning against her. When Sen. McCaskill thinks it’s time for you to go, that says a lot!

Remember Senator McCaskill? We recently reported her failure to disclose her dinner with the Russian Ambassador. She conveniently forgot all about it during the big Russian investigations that have plagued Congress this year. And let’s not forget when she body-shamed Trump on the campaign trail, asking for daily weigh-ins. In other words, McCaskill is no class-act. The fact that she see’s the error in Chappelle-Nadal’s ways means even liberals are ashamed of this mad woman’s antics.

Of course, Chappelle-Nadal refuses to step-down. However, the number of constituents calling for her resignation is growing by leaps and bounds. The Senator is a delusional racist. Ironically, she plays the race card, pretending to fight for equality and human rights. Last I checked, Jewish people were people too.