These flip-flops of the fake news media should be in the Smithsonian!

How can Leftists possibly defend this obvious bias. Their opinions on the same issues vary depending solely on whether they get their way.

Check out the first example, where the same writer only days apart calls Trump first a “Moderate Republican”, then suddenly he’s a fascist. 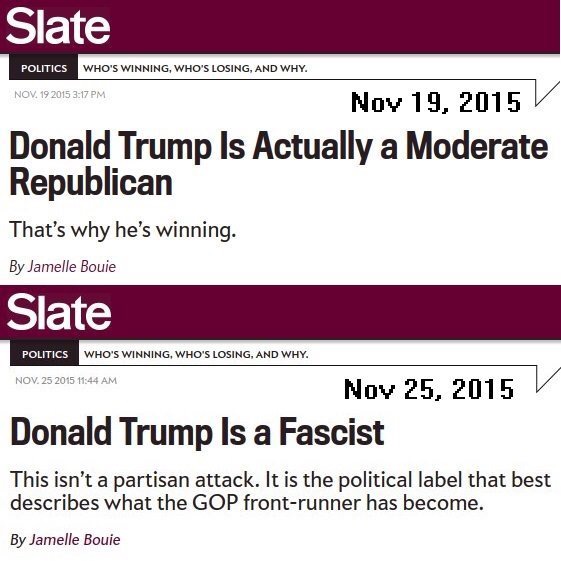 And what of Leftist rag, Salon who accuse the Right of “trivializing” the use of Nazi and Hitler references. Ironically, the same writer does exactly the same thing when discussing then-candidate Donald Trump.

What had Trump done to become “Hitler”? He contemplated running for president…as a Republican!

Here’s an interesting one, as the Democrats have a big advantage in the electoral college. But then the bad news came for Hillary Clinton that electoral college voters wanted to break away from her.

As the Olympian reported at the time:

For the first time in four decades, members of the Electoral College in Washington state have broken from the state’s popular vote for president, with four electors casting their votes for candidates other than Democrat Hillary Clinton.

Elector Bret Chiafalo, who earlier in the day said he planned to vote for Republican Ohio Gov. John Kasich, said he ultimately changed his vote to Powell after conversations with other Washington electors.

The last time an elector broke from the popular vote in the state was in 1976, when Mike Padden of Spokane Valley, who is currently a Republican state senator, voted for Ronald Reagan in 1976 instead of Gerald Ford, who had won the state. In last month’s election, Republican Trump won 306 electoral votes to Clinton’s 232, though Clinton’s tally will now be lower.

And then there was discussion of hacking.

Donald Trump brought it up, as he knew you couldn’t trust the Democrats.

At some point the Democrats realized they were going to lose, and you see the outcome. Suddenly, hacking was possible.

Check out CNN’s hypocrisy on the subject. Merely weeks apart they had suddenly changed their tune.

Pissing off hackers is not good, when you’re crooked. And Leftists have more dirt than a landfill.

Russian hackers are targeting U.S. progressive groups in a new wave of attacks, scouring the organizations’ emails for embarrassing details and attempting to extract hush money, according to two people familiar with probes being conducted by the FBI and private security firms.

At least a dozen groups have faced extortion attempts since the U.S. presidential election, said the people, who provided broad outlines of the campaign. The ransom demands are accompanied by samples of sensitive data in the hackers’ possession.

In one case, a non-profit group and a prominent liberal donor discussed how to use grant money to cover some costs for anti-Trump protesters. The identities were not disclosed, and it’s unclear if the protesters were paid.

Of course, once Trump was elected, the Progressives showed their duplicity in spades. Check out this example. 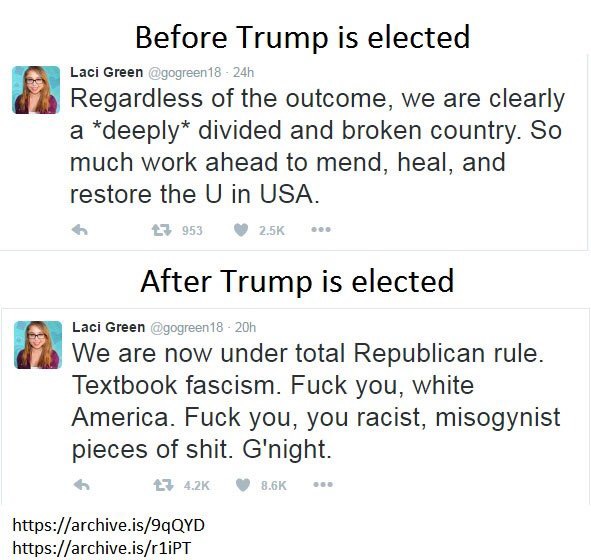 Then there was Comey.

Check out how WaPo depicted Comey months apart. When they rightfully thought Comey was in their corner, they accused Republicans of a witch hunt. Then when Comey covered his ass, the Democrats abandoned him faster than a black Leftist “baby daddy”.

Next, we have Democrats showing their two-faced nature in political theater.

We learn from Sally Kohn that things are ok when Democrats do them, but not so much when Republicans do it.

What did the media say when President Trump did exactly what Obama did, and replace U.S. attorneys?

Here’s just one example of how the media reacted.

Next, who can forget how the Democrats present the Affordable Care Act, aka Obamacare. It would be a travesty if we were to lose it, right?

Let’s see how former DNC Chairwoman Donna Brazile reacted to Obamacare then, and when it impacted her.

There are many more examples at Imgur.

Suffice it to say, the Democrats are the biggest hypocrites on the planet. What separates Conservatives from them is we have a conscience. Wrong is wrong, period.

I speak for most Conservatives in saying that my views have changed little in adulthood. Don’t mistake that view for our inability to learn, grow, evolve. Quite the contrary. Typically, as Conservatives learn, we get a deeper understanding of ourselves and why we’ve formed our views. Leftists deny the truth, and considered that denial growth.

Perhaps we will do another round of these “compare and contrasts” as there are plenty. And because Leftists never learn, there will be plenty more.