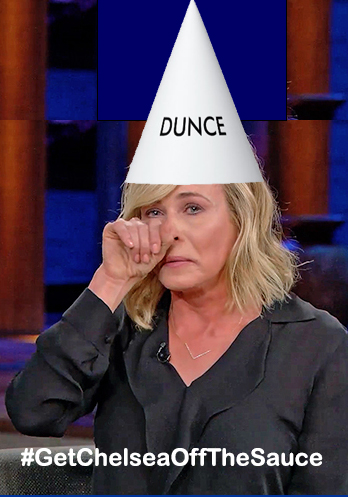 Dr. Ben Carson is a world-renowned neurosurgeon and former Director of Johns Hopkins and currently holds 30+ doctorate degrees. Anyone who has met him (or had their lives saved by him) has nothing but praise for the man. I’m sure this kind of idiocy doesn’t bother the good doctor, as he is far above it. But as for me, I’m pissed!!!

On a recent broadcast of her Netflix program, she outlines the various forms of “racists, ” and in the final category she defines “Black White Supremacist.” Chelsea goes on to educate the masses by explaining that this group is comprised of “black people who think white people are better than them.” What kind of crap is this woman sniffing anyway?

There is an adage that says, “Better to remain silent and be thought a fool than to speak and remove all doubt.”

Well, Chelsea Handler has once again removed all doubt.

Hollywood elites claim Chelsea screwed her way to the top.

An ostrich with its head stuck in the sand would be more informed than this woman. And, the utter nonsense people pass off as humor and news today is pathetic.

How in the hell this woman landed a hosting gig on Netflix is beyond my understanding? There are those who claim she screwed her way to the top. I guess that means she may be good at something, but hosting is not one of them.

The late Joan Rivers, a comedic legend, told viewers of the Howard Stern Show exactly how Chelsea made her way up the ladder.

Without any of her trademark verve, Joan spat: ‘The girl made it on her back f**king the president [of E!].’

Ms. Rivers wasn’t the only (REAL CELEBRITY) to accuse Chelsea of being a whore. Even her “on screen bff,” Jennifer Aniston claimed Chelsea slept her way to the top. Read it here.

The horrifying part of all this is that some people are gullible enough to believe her silly ass. Not anyone with half a brain, mind you, but according to some statistics today, that leaves half the population open for grabs.

A Book Dedicated to Her LIES!

In the book, “Lies that Chelsea Handler told me” Johnny Kansas says, Working for her is very much like working for a highly functioning, oversexed, drunken chimpanzee. Just when you think you’re part of the family and it’s all fun and games, she turns on you and bites off your fingers, nose, and genitals.

Chelsea Handler is indeed a Dunce of the Highest Order!

The woman is without a doubt one of the most ignorant ill-informed idiots I’ve ever seen in Hollywood. And, trust me, that is casting a wide net. So from me to you Chelsea, GROW UP and get a life!!!

Take a minute to stand back girlie, and examine your “Lime Light.” It is nothing but pure pathetic and fading glory that will come back to haunt you. When you grow up enough to realize the damage you’ve done, it will be too late. There are some things you just CAN’T DROWN IN BOOZE!