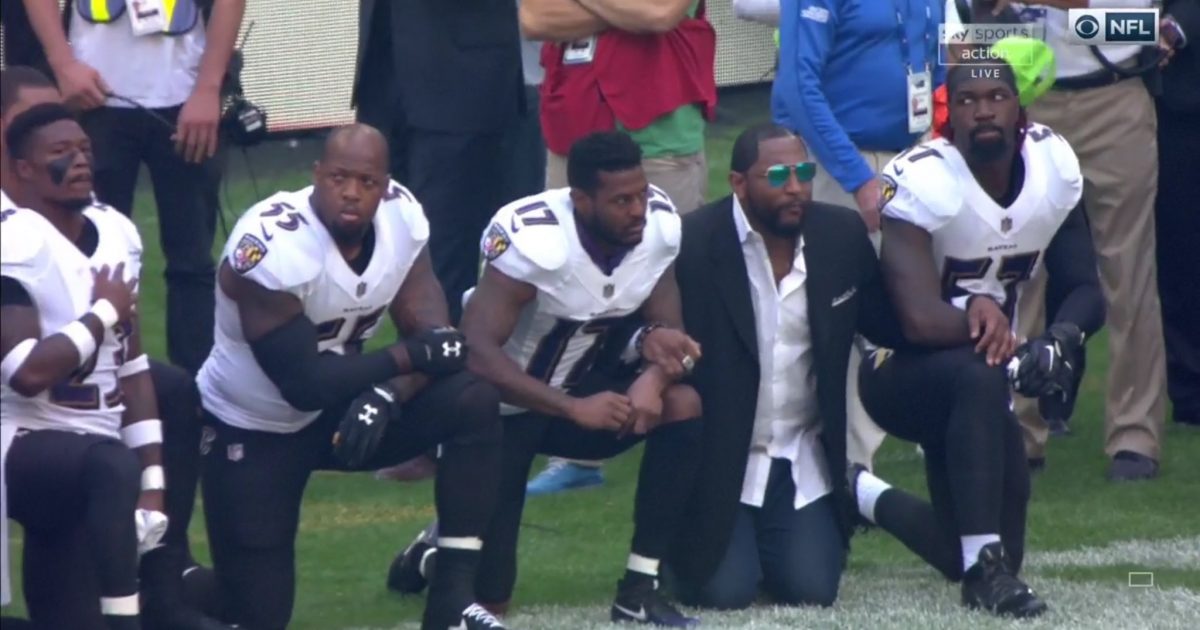 Consider that the NFL is roughly 68 percent black, you get an idea of how blacks feel about Colin Kaepernick’s cause, the ruse of Black Lives Matter, and the political-correctness of what used to be a sport for gladiators.

Another quick note: Almost the entire Pittsburgh Steelers roster was part of that 100-man protest team.

I suspect the 1500 other “real men” would like to see Kaepernick and the 100 who join him in solidarity go play in the European Football League.

For those who know my work, I explain why black unemployment is so high. It’s because of idiots like this. Even when black Leftists make MILLIONS of dollars, they still complain. Think any of these sorry a-holes care that the NFL owners will suffer? Most have their contracts, so why worry about a few very wealthy white men?

If these black multi-millionaires whiners told the truth, they would love to see the white owners suffer, as long as the players get to keep their jobs.

But will they get to keep their jobs long-term?

Let’s begin with the president’s claim of lower ratings.

We’ve been reporting on lower ratings for some time. And now the president makes his claim of low ratings, due to the national anthem and the sport being “boring”. Take a look at the jaded reporting of Newsweek:

The website Sports Media Watch posted a helpful graphic of the major games thus far in the NFL season (not counting Sunday’s matchups since the ratings were not out yet) and nearly every important game had ratings that were down or relatively flat. This week’s Thursday Night Football game, however, was actually up 38 percent. The late game on Fox last week was up 17 percent as well. But most of the other major games were down anywhere from 3 percent to 28 percent. CBS’s Sunday games, for instance, were down about 10 percent from last year. The Hollywood Reporter reported that ratings were down 15 percent in Week 2, even after ratings were down 8 percent last year.

So we’re clear. 32 teams and one bye week. So 30 teams, i.e. 15 games happen every week. This report references 2 games, one on Thurs, and the late game on Fox as proof that President Trump wasn’t completely correct. So 13/15 or 87 percent of the games had lower ratings, but the president is fudging, according to Newsweek.

Below is a tweet of a section of stadium with quite a few empty seats. This looks like the New England game, and could be a bad camera angle. We will know more when we get the ticket sales data.

There are a lot of empty seats at the New England Patriots game. #TakeTheKnee #TakeAKneeNFL #MAGA pic.twitter.com/oIFCHqOO2S

We get a much better vantage point at the Rams game in LA. One can clearly see that many people didn’t show up.

If this is in Californicate, imagine how things played out around the country.