Some might see what happened to the NFL as getting Trumped. However, the NFL brought this doom upon itself.

Football is an American sport, and obviously an American tradition. People prepare for the battle royales every Sunday, then again on Monday nights, and in lesser amounts on Thursday. The grand finale known as the Super Bowl brings people together for parties, and gives some city bragging rights for a year.

Football used to be a constant. The sport provided reverie and ratings. Needless to say, the sport created icons.

However, something dramatic happened over the past decade. It seems the multi-million dollar contracts have erased integrity from the field. The sport is no longer about sport, and catering to its audience. Instead, it seems almost that the NFL is determined to marginalize, even lecture its audience.

Apparently, armchair quarterbacks are done with the disrespectful, spoiled athletes who refuse to honor the greatness of this country. They recognize what the sport says to them, as weekly affronts continue to occur.

Thus, the ESPN network — hardly a bastion of conservatism — confirmed on Tuesday evening that DirecTV is altering its own policy which normally prevents package cancellations after a sports season has started, and will return the full amount of money for any viewer who wants to cancel their NFL bundle.

Those viewership packages allow die-hard sports fans to watch games that are outside their local viewing area, and run about $280 per season.

Direct TV’s surprising move came after President Donald Trump spoke out about professional players who kneel or make other disrespectful gestures during the national anthem.

DirecTV does not disclose its Sunday Ticket subscriber numbers, but some estimate as many as 10% of the satellite TV provider’s 20.8 million customers subscribe to the NFL package.

Roger Goodell has made it clear during his tenure that he has succumbed to Leftism of his sport.

He has practically made the sport flag football. Year after year the sport gets more “safe”, as Leftists would claim. They cite concussions as the reason to implement more and more runs. But how safe can you make a sport where men run into each other at 20 mph?

While the fans are all for safety, Goodell allows a good does of politics to enter, and the politics don’t cater to his audience.

In a business where almost 70 percent the employees are black, Goodell allows his multi-millionaire employees to protest their oppression. Goodell sees this social-engineering as good for business.

Goodell said he wants to bring the NFL from $9 billion a year to $25 billion a year. And he wrongly believes that succumbing to socialism is the way. But is there a selfish motive?

According to Business Insider:

Based on tax filings for the NFL, Roger Goodell was compensated more than $150 million in salary and bonuses in his first eight years as NFL commissioner. For comparison, that is $60 million more than Tom Brady earned during the same period.

While the comparison is apples and oranges, it does seem to provide some insight into where the league places its values. That is, a spokesperson for the NFL’s 32 owners makes more money than one of the players that is most responsible for the revenue the league enjoys.

Even Direct TV seems to get the irony.

They have a reputation for locking consumers into misleading contracts that entice buyers with low initial rates which steadily increase. However, even Direct TV wants nothing to do with the letdown the NFL just gave the nation. The refund appears to be a first.

And the carnage will continue. But not just for the NFL and the owners. The players are seeing the ramifications. 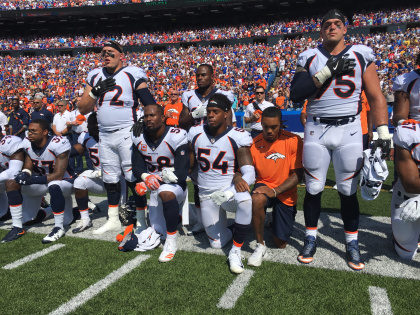 Broncos linebacker Von Miller may be out an endorsement deal as a result of kneeling during the national anthem.

Before the team’s game with the Buffalo Bills Sunday, Miller was one of 32 members of the Broncos who took a knee to protest what they see as racial injustice in the country.

President Trump on Friday, and again several times through the weekend, said athletes should be fired for taking a knee during the national anthem, tweeting that “if a players wants the privilege of making millions of dollars in the NFL, or other leagues, he or she should not be allowed to disrespect our Great American Flag (or Country) and should stand for the National Anthem. If not, YOU’RE FIRED.”

In response, players across the NFL protested Sunday by taking a knee, locking arms, or placing a hand on a teammate’s shoulder in a show of support. Some did not even come out of the locker room for the anthem.

As a result of his actions before the game, Phil Long dealership asked CBS4 and other television stations to stop airing their ads featuring Von Miller.

Don’t think President Trump lets up. He knows he’s on the winning side of this debate.

It’s good to see the president double-down on something so important. The lack of respect for this country has gone on long enough.