Last Sunday in Washington DC may have been a scene from The Longest Yard: where the team revolts on its star quarterback.

In an odd case of life imitating art, rumors are swirling that the Oakland Raiders offense may have conspired to intentionally lose their primetime Sunday Night Football matchup against the Washington Redskins.  What would cause a professional athletic team to even consider purposely tanking a game infront of a national TV audience?

In one word: Politics.

Remember the key word is ‘almost’.  Not every member of the Raiders took a knee, namely franchise Quarterback Derek Carr. 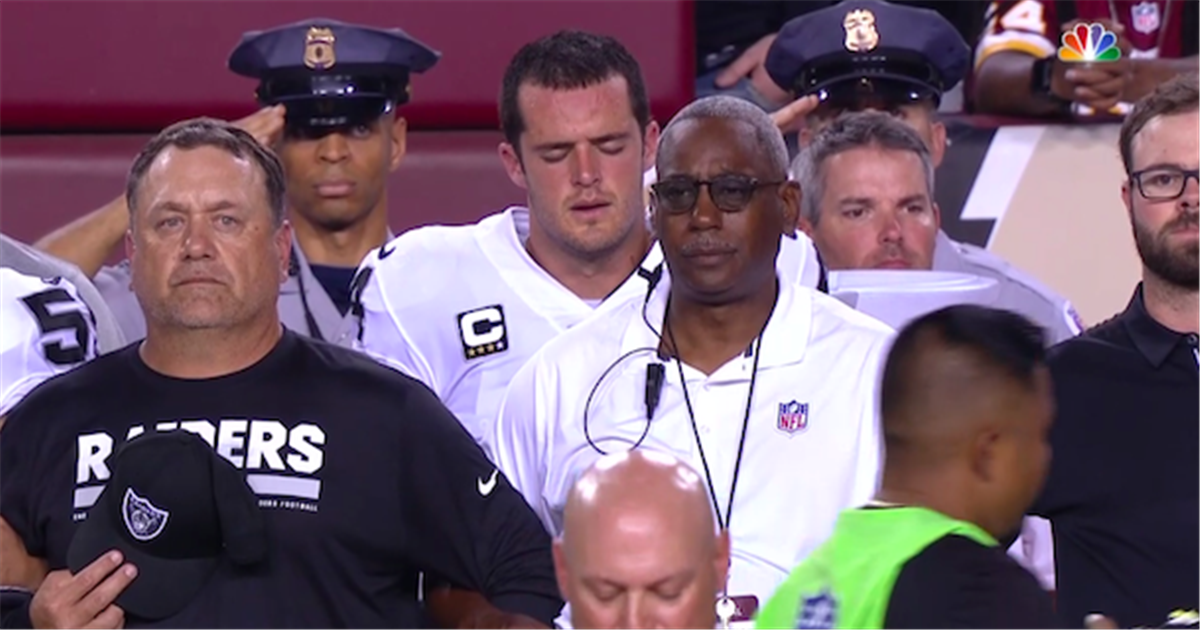 “So Derek Carr, who is never sacked – was sacked four times by the Redskins, back to back on the second offensive series of the Raiders,” the host said.

“The first series he threw almost immediately was intercepted, so that series was over before it began,” they said.

“Also, three times, the extremely dependable, never-does-this center – the guy who snaps the ball to the quarterback – snapped it before Carr was ready … three times. He “hiked” it – as the kids say – into Carr’s knees before he was supposed to.

Coach Jack Del Rio denied Monday that the emotions leading up the Raiders’ game against Washington the day before had anything to with his team’s lackluster performance on a national stage.

Asked if what had happened throughout the league on Sunday was a distraction or affected the way the Raiders played, Del Rio, at his news conference, simply answered, “No, I don’t think so” without elaborating.

However, the Raiders offensive linemen were a little ‘more vocal’:

Raiders offensive lineman Donald Penn said, “I wish I didn’t have to do anything like that. I’ve been standing all the time, but when you get called out personally by the President of the country you gotta do something. I ain’t wanna do that. I don’t think my teammates wanna do that.”

Right tackle Marshall Newhouse added, “The injustice in the country just doesn’t sit well with us, regardless of what the President said before. This is kind of an ongoing problem and we’re making a statement about that. It might seem that way that it was kind of a reaction to the President, but this stuff’s been going on for a long time.”

But Where There’s Smoke…

Armstrong & Getty revealed that an “inside source” is claiming that the game was thrown. If this is true, the NFL has a huge problem on their hands. In their Thursday broadcast, the duo pointed out that one of the Raiders’ players said:

If this story is true, you’ve got an animosity between a white quarterback and a black offensive line that you can’t fix very easily.  Now this is getting into paranoia…and the fan base and the whole country.

So is this a one-time punishment?  Have they gotten together and talked to each other?  Or are the black guys in the team not going to block for the white guys?

At least for one game, it seems to be a message that was sent.  Maybe it was brief, maybe it was ‘alright, we’re going to let him get hit a couple times, see if he gets the message, but we don’t know.

There were a handful of dropped passes by some of the black players that were ‘really weird’.

That happens in the NFL all the time…but then the other stuff came up.

They have a huge danger warning buzzer going off right now because if this happens on the Raiders, it could happen on any team as different decisions are made…as times are divided.

When a reporter asked a team official about this, the hosts said they would be ‘blackballed.’

On a very tumultuous Sunday that split the country down racial and ideological lines, players may have tarnished the sacred institution of Sunday football.  Rabid sports fans now burn their once cherished NFL gear, as stadium fans were openly booing their own home teams.

Then in a potential career-ending move, Tennessee Titans Tight End Delaine Walker attacked his own fans, saying “don’t come to the games.”

“And the fans that don’t want to come to the game? I mean. OK. Bye,” he told The Tennessean. “If you feel that’s something – we’re disrespecting you, don’t come to the game.”

“It’s about equal rights. That’s all everyone is trying to show… that we all care about each other,” Walker said.

The Curious Case of Alejandro Villanueva. Pittsburgh Steelers Offensive Lineman Alejandro Villanueva had to clumsily apologize for standing at attention, hand-over-heart, wording along to the National Anthem as it played on the PA system.

Alejandro Villanueva said he never intended to stand alone during the national anthem on Sunday and apologized to his teammates and coach Mike Tomlin for what he called “a very embarrassing” botching of the team’s pregame plan.

“Every single time I see that picture of me standing by myself, I feel embarrassed,” Villanueva said.

“We butchered our plan.”

Why did he have to apologize?  Because like Carr, Villanueva stood alone.  However, Villanueva’s personal story is very unique.

Villanueva comes from a military family background, both of his parents served in the Spanish Armed Forces.  Villanueva, by chance was born in Mississippi, so he was automatically an American citizen by birth.  Villanueva went on to earn a commission at West Point.  Villanueva served as an officer in the US Army for both the 10th Mountain Division and later the 75th Ranger Battalion, seeing action in Afghanistan on three deployments earning a Bronze Star.

So, what would make someone of this caliber personally cave in such a manner and give what was obvious to everyone a forced-apology?

Sadly, the truth came out much later:

It wasn’t me stepping forward. I never planned to boycott the plan that the Steelers came up with. I just thought there would be some middle ground where I could stand in the tunnel, nobody would see me.

Thus was Coach Tomlin was forcing his political will onto his players:

As the country tuned in to the NFL Sunday afternoon to see how the teams would react to Darth Cheetos’ insults and taunts, the Steelers decided to stay in the locker room during the national anthem, an act that was roundly considered a clear repudiation of the president.

But maybe it wasn’t! But maybe it was! Who knows? I just know I wouldn’t be surprised if I went out sometime after the season and saw Mike Tomlin rolling around the Burgh with a “U Bum” T-shirt on.

If players continue to politically “fix” games, these players may very well get their wish. You can bet that Vegas betters will pay close attention in the coming weeks, as will fantasy sports players.