We are learning more and more about the Vegas massacre, and there are a few surprises.

First, that the shooter was not Muslim did surprise quite a few people, given the religion of war’s propensity for killing infidels.

Next, we learned that the mass shooter is an older white man, 64-year-old Stephen Paddock. Mass shooters average age is 35. I wasn’t aware of this, and couldn’t find any data to back it up. Given the research I was able to find, I see no reason to doubt the number. What I do know is that most older men are not mass shooters.

Needless to say, there is more to learn, but we do have this update. It appears that Paddock was seeing a married woman, namely Marilou Danley. She is described as “Asian,” so I will take the media’s word for it. She looks Asian to me, but then she might profess to be a black man.

Interestingly, we came upon a couple of graphics from her Facebook page, and we now know a few more things about Marilou Danley.

First, she likes to pose seductively. And, her husband’s name is Geary. 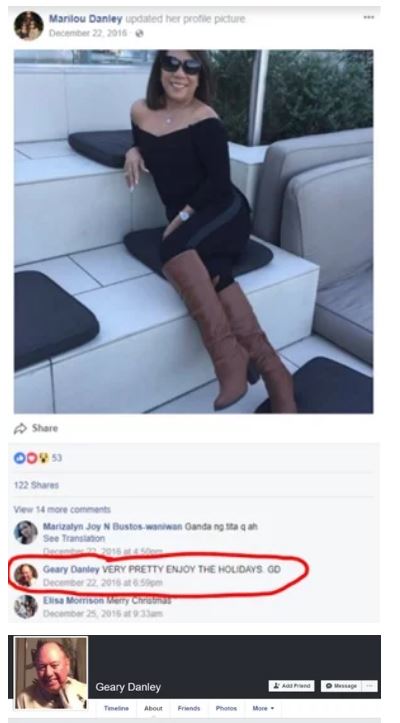 The picture appears to be taken on a boat, though Marilou doesn’t look like she’s much of a sailor.

Interestingly, the note from her “husband” says for her to enjoy the holidays. Ergo, the husband/wife duo are not spending the holidays together.

Was this marriage a ruse for citizenship? The plot thickens.

We also learned a bit about Geary Danley.

Based on his Facebook page, we can see that Geary is a Leftist.

That doesn’t prove that Danley’s wife is a Leftist, but certainly suggests it. And to be clear, Geary Danley has nothing to do with the shooting in Vegas.

In yet another interesting twist, The Daily Wire reported that Paddock only used Danley’s identification, as she is apparently out of the country.

Now that’s an interesting twist, given that people said Danley was warning them about the shooting, as we reported earlier.

Here is a video of a young lady who was confronted by Danley:

Las Vegas concert goer says a woman told her and group of friends, “you’re all going to die tonight,” 45 minutes before shooting. pic.twitter.com/EHFpNRHKvu

I didn’t get the impression this young lady is lying. Further, her story would be easy to check, as security would be able to confirm or deny it.

If indeed Marilou Danley is associated with Paddock, it would be difficult to believe that she would know nothing of his plans.

I predict this shooter and his companions are Democrats, and dyed-in-the-wool types. Even the fact that Paddock had an illegal weapon bolsters my confidence.

Who targets a country music concert? Rappers on both coasts are lighting up blunts and toasting this event. They have to find it ironic that a concert gets shot up, and it’s a white guy killing a bunch of white people, and not black on black carnage.