Hollyweird doesn’t know what it likes or dislikes.

These people make so much money so fast they get distorted. They order off menu, because they can. They support causes in places they know nothing about, because they want to be popular at the next cocktail party.

Occasionally however, you find an actual human in Hollywood. Actor Jeffrey Dean Morgan appears to be one of them.

Morgan plays the villain “Negan” as a cast member of the hit AMC series The Walking Dead. Recently Morgan was spotted wearing a shirt that got the zombies in Hollywood to fixate on him, and of course wish to suck out his brain.

sincerely one of the worst things to ever happen to me: Jeffrey Dean Morgan is an Blue Lives Matter advocate pic.twitter.com/UwCA96LyJe

And in typical Leftist fashion, the hate rained down like sunshine in a Phoenix Arizona summer.

People who’s biggest problems in life is whether to order their grande-iced-sugar-free-soy-vanilla latte  with or without whip cream emerged from White Privilege and the Black Condition as a backdrop to the Misogynistic and Patriarchal Pre-Incan Society lecture comas to chime in.

And what did these snowflake offer? Check out “young potato” who feels betrayed!

i have been betrayed quite a few times in my life, but jeffrey dean morgan wearing a blue lives matter shirt today might top the list

67 of her friend “hearted” her feelings, while 23 RT (retweeted) her TOP betrayal. This little princess has a few life lessons coming, if this was tops her current list of betrayals.

Ellie here has a bit of homework.

“fembeth” is brutal. She takes Shark Tank’s Kevin O’Leary’s approach to those who cross her.

I hope Jeffrey Dean Morgan can deal with the excommunication from the life of a likely feminist who only has need for his character, and not his LOINS! 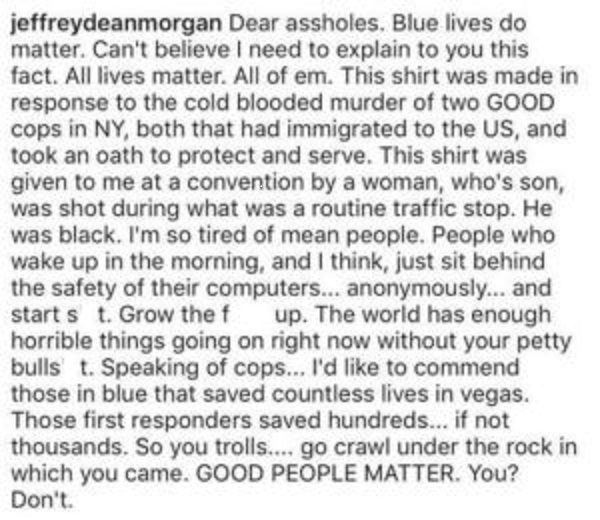 Jeffrey Dean Morgan says “Grow the f*ck up!”. Four simple words that all Leftist should be forced to hear repetitively until they are at least 40.

Why do Leftists, particularly Millennials hate the police? Because they are told to. And these anarchists are not their pot-smoking, cocaine-snorting free love mostly non-violent hippie parents. As The Hill suggests, these people are killers:

Miosotis Familia was the kind of person most Americans celebrate. She was a strong woman, a loving mother, and eager to work in New York’s tougher neighborhoods as a respected member of its police department.

She wasn’t killed in the line of duty in one of the “usual” ways officers lose their lives. There was no bank robbery shootout; no drug deal gone bad. Instead, Officer Familia was assassinated this July for being part of a now-targeted class of people: cops.

Of the last six members of the NYPD killed on duty, she was the third to be murdered because of her uniform and badge. Another luckily survived a 2014 attack by a man wielding a hatchet in Times Square. The FBI reports that in 2016, 20 officers were similarly killed in ambushes or unprovoked attacks, representing almost a third of all cops killed in action and nearly three times more than the prior year.

And what of the thin blue line, and what that flag means?

This flag, as well as a basic version with a solitary blue line against a black background, has long been used as a symbol by police officers across the country to show solidarity in the difficult days following a line-of-duty death. Now, they are used more broadly by a growing public seeking to display their support for law enforcement, in a time when many groups on the left, and even celebrities and comedians, are filling the airwaves with anti-police rhetoric.

The thought of writing about the flag came to me as I biked through one of New Jersey’s quaint beach towns this July. I noticed house after house, from simple cottages to multimillion-dollar mansions, proudly displaying either version of the blue line. Not all of them could be cops.

Confirming its growing popularity, the president of Blue Lives Matter NYC, a charity which supports the families of fallen officers, reported that the $40 Blue Line American Flag is their highest grossing item nationwide, while the number of for-profit retailers selling blue line products on Amazon and Ebay corroborates the trend.

Leftists can’t have police ruining their false narratives. After all, Democrats have invested heavily in the lie of oppression.

They need that lie to continue to pay off like a rigged slot machine.

Lucky for Morgan, he’s on a hit series, and he doesn’t have to worry about a few naysayers. Let’s hope these a-hole create another outed Conservative in Hollyweird.